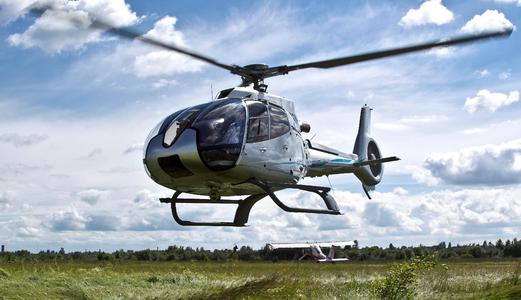 (PresseBox) ( Marignane, France, 13-10-23 )
Eurocopter has provided the initial EC130 T2 to a customer in Kazakhstan, introducing this enhanced version of its single-engine EC130 helicopter to the Commonwealth of Independent States (CIS) and further expanding the company's presence in a region where demand for rotorcraft is rapidly growing.

The milestone EC130 T2 is configured for passenger transport, and was delivered this month from Eurocopter's headquarters in Marignane, France.

"We are very proud to have provided this initial EC130 T2 to Kazakhstan, demonstrating the dynamics of the CIS market," commented Laurence Rigolini, CEO of the Eurocopter Vostok subsidiary. "We are confident the owner will be impressed by the EC130 T2, which combines the largest cabin of any single-engine helicopter with enhanced performance. It is perfect for passenger transportation, sightseeing and VIP duties that are developing in the CIS, as well as the region's medical and surveillance missions."

The multifunctional EC130 T2 has a spacious cabin for one pilot and up to seven passengers. In addition to its improved performance, a number of enhancements enable easier maintenance and longer inspection intervals.

More than 70 percent of the EC130 T2's airframe structure has been modified in comparison to the existing EC130 B4. New and updated features include the use of a more powerful Arriel 2D turboshaft engine and upgraded main gearbox; the incorporation of an active vibration control system; improved air ventilation, distribution and demisting systems; a cabin interior structure redesign with a full flat floor; a cockpit update for enhanced man-machine interface; new energy-absorbing seats that improve weight and balance for passenger loading; integration of a crashworthy fuel tank; and increased maintenance accessibility for electrical and air conditioning systems.

The EC130 T2 performance was improved to have a higher maximum gross takeoff weight (2,500 kg. for internal loads, and 3,050 kg. when external loads are carried) and a speed increase of up to 10 kts. Even with these enhancements, the EC130 T2's external sound level remains within the strict rules for flights at America's Grand Canyon National Park - an important factor for tour operators around the world.

Eurocopter Vostok, which is a 100-percent wholly-owned subsidiary of Eurocopter SAS, was created in 2005 to provide sales and customer support, and to implement fleet follow-up in Russia and the CIS. More than 140 Eurocopter helicopters currently are operating throughout Russia and the CIS countries - bringing the Eurocopter Group's share of the Russian and CIS gas turbine market for Western turbine-engine helicopters to more than 70 percent.

As part of its CIS presence and long-term commitment to the region, Eurocopter also has developed a strong partnership with Kazakhstan - establishing the Eurocopter Kazakhstan Engineering at joint venture Astana International Airport for helicopter assembly and customization, along with maintenance, support and training services.