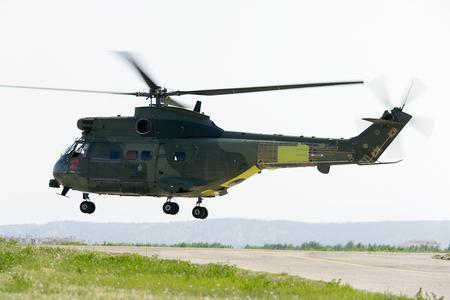 It is the first helicopter to be modified under the Puma Life Extension Programme, which was approved by the UK Ministry of Defence in September 2009 and placed on contract with Eurocopter UK.

This programme will extend the operational life of the Puma helicopter fleet and is to significantly enhance its capability - particularly in demanding hot and high conditions. It will improve the safety and performance by providing new engines, a digital flight control system, increased platform survivability and enhanced navigation and communications.

"The Puma Mk2's first flight is an important milestone, marking the initial step in a test programme that will continue through the second half of 2011," said Markus Steinke, the Managing Director of Eurocopter UK. "It also represents the achievement of a significant and successful effort focused on design, development and programme management by Eurocopter and Ministry of Defence teams in both the UK and France."

Eurocopter-built Puma rotary-wing aircraft currently represent one third of the UK's medium battlefield support helicopters. They are used as battlefield helicopters within the Joint Helicopter Command to provide tactical troop and load movement by day and night.

Puma Mk2s are planned to enter service with the Royal Air Force in 2012, and achieve full operating capability in 2014.