The EC725 Cougar helicopter is spotlighted, underscoring Brazil's major acquisition of these rotary-wing aircraft and the key industrial role of Helibras in their production 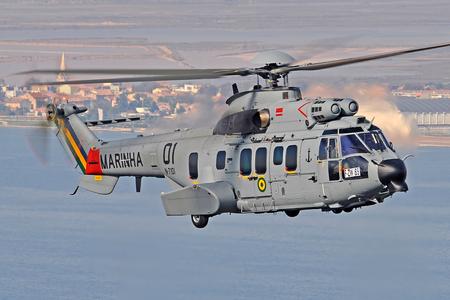 (PresseBox) ( Rio de Janeiro, Brazil, 11-04-12 )
The high-profile presence of Eurocopter at this week's LAAD Defense & Security 2011 exhibition in Rio de Janeiro is focused on the growing importance of its Helibras affiliate in the manufacture, assembly, modernization and mission-outfitting of the company's rotary-wing aircraft for Brazil and the Latin American marketplace.

Among the helicopters spotlighted on Helibras' exhibit (#G-30, on the outdoor display area) is the twin-engine EC725 Cougar helicopter, which is being acquired by the Brazilian Armed Forces - and will be built in a new center of excellence created at its Itajubá facility in the Brazilian state of Minas Gerais. The Eurocopter parent company also is participating in the LAAD 2011 event, presenting an overview of its rotary-wing aircraft family on the stand of EADS (#F46 in Hall 4).

As the only Brazilian helicopter manufacturer, Helibras has the capability of producing a variety of aircraft in Eurocopter's product line. It supplies over 50 percent of the country's turbine-powered helicopters - having delivered more than 500 aircraft in its 33 years of operation to meet the requirements of governmental, military and civil customers.

"Helibras is on the way to becoming a cornerstone in Eurocopter's global industrial base, with all the skills necessary for helicopter manufacturing, assembly, integration, upgrades and support," said Eurocopter President & CEO Lutz Bertling. "Our presence in Brazil positions Eurocopter for future growth in the country and across Latin America, while also ensuring excellence in support and training for operators throughout the region."

At Itajubá, Helibras is preparing for the assembly of EC725s, which the Brazilian government contracted in 2008 to acquire 50 helicopters for transport and civil security missions. Construction is underway on Helibras' new EC725 production factory for completion in 2012 - doubling the company's employment, bringing total staff to approximately 1,000.

The EC725 is Eurocopter's latest member of the Super Puma/Cougar helicopter family. In addition to building this 11-metric-ton-class rotary-wing aircraft at Itajubá, Helibras is to become involved in such industrial activities as the manufacture of EC725 tailbooms and electrical harness, plus the assembly of gearboxes. Helibras also is working with Brazilian companies to develop a local supply chain, and it is supporting the acceleration of in-country technical and university courses for aeronautics and aerospace.

At this week's LAAD 2011 defense and security show, Helibras also is exhibiting the AS550A2 Fennec, operated by the Brazilian Army Aviation Command - and which will be modernized by the company in a program that incorporates a tailored complement of armament, a new glass cockpit, an Automatic Flight Control System (AFCS) with autopilot, and the installation of improved pilot seats for enhanced crash protection.

The single-engine, multi-purpose AS550/AS350 entered service with the Brazilian Army Aviation Command more than two decades ago, and Helibras' upgrade program will ensure the continued operation of these helicopters for at least 25 additional years. As part of the LAAD 2011 exhibition, Helibras will be showing the AS350/AS550's new instrument panel layout, which incorporates three large multifunction liquid crystal displays and is being developed by the company in cooperation with France's Sagem and the Brazilian firm Aeroeletrônica.

Helibras has produced more than 400 AS350s for the South American market. The helicopter's modernization also can be applied to the large inventory of AS350 Ecureuils operating throughout Brazil - which totals some 350 aircraft.

Included on Helibras' LAAD 2011 exhibit stand as well will be a single-engine EC130 fitted with an aeromedical kit, along with a twin-engine HM-1 Pantera helicopter - the version of Eurocopter's AS565 Panther in service with the Brazilian Army. Helibras has a contract to upgrade 34 HM-1 Panteras of the Brazilian Army Aviation, which will extend the current fleet's operating lifetime by at least 25 years. The Pantera modernization includes new Turbomeca Arriel 2C2 CG engines with FADEC (Full Authority Digital Engine Control), a full glass cockpit, 4-axis autopilot, the Pro Line 21 radio suite for communications, navigation and surveillance, as well as a new Fenestron with asymmetric blades.

"With our very strong presence at the 2011 Latin America Aero & Defense show, Helibras is demonstrating how the company is pursuing its vision for the future," explained CEO Eduardo Marson Ferreira.

Helibras is the only Brazilian manufacturer of helicopters. The company is subsidiary of Eurocopter Group, the largest global supplier of aerospace industry, controlled by EADS - European Aeronautic Defence and Space Company. With more than 50% in the Brazilian fleet of turbine helicopters, Helibras is in activity in Brazil since 1978 having sites in Minas Gerais, São Paulo, Rio de Janeiro and Brasilia. Its factory, which employs more than 500 professionals and has capacity to produce 36 aircraft per year, is located in Itajubá (MG), where different models of aircraft are produced, meeting the requirements of civil, governmental and military sectors. Since its foundation, Helibras has already delivered more than 500 helicopters in Brazil, 70% of the Ecureuil model. In 2010, the company had a turnover of R$ 395 millions.

Established in 1992, the Franco-German-Spanish Eurocopter Group is a division of EADS, a world leader in aerospace, defense and related services. The Eurocopter Group employs approximately 17,500 people. In 2010, Eurocopter confirmed its position as the world's number one helicopter manufacturer in the civil and parapublic market with a turnover of 4.8 billion Euros, orders for 346 new helicopters and a 49 percent market share in the civil and parapublic sectors. Overall, the Group's helicopters account for 33 percent of the total worldwide civil and parapublic fleet. Eurocopter's strong worldwide presence is ensured by its 28 subsidiaries and participations on five continents, along with a dense network of distributors, certified agents and maintenance centers. There are currently 11,200 Eurocopter helicopters in service and some 2,900 customers in 147 countries. Eurocopter offers the largest civil and military helicopter range in the world.