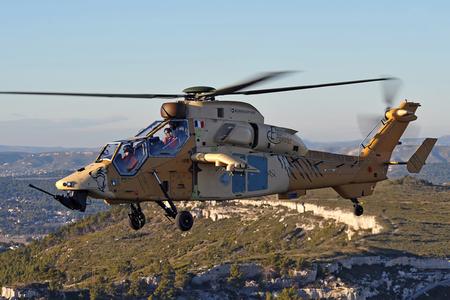 (PresseBox) ( Marignane, France, 10-12-17 )
The first pre-serial Tiger HAD (fire support and destruction) for France made its maiden flight from Eurocopter's Marignane, France facility. It marks an important step towards the Block I initial qualification of the Tiger HAD, which is one of four versions in Eurocopter's multi-role Tiger combat helicopter family.

During the next several months, Eurocopter will conduct joint testing and development flights of this Tiger HAD along with the first Spanish Tiger HAD - which re-started its flight test sequences three months ago subsequently to its transfer to Spain and lay-up.

In addition, France's Tiger HADs will have the capacity to launch Hellfire air-to-ground missiles, enabling them to perform multi-role missions that meet a variety of operational needs - including armed reconnaissance, combat support and attack.

To date, 64 Tiger HADs have been ordered: 40 by France and 24 by Spain (of which six are retrofits of previously-delivered HAP versions).

The state-of-the-art Tiger combat helicopter family is available in four main versions, with total orders placed for 206 of these rotary-wing aircraft. Currently, there are 64 Tigers in service with four countries: France, Germany, Spain, and Australia. Of these, three French helicopters have been operating successfully in the Afghanistan theater of operations for the past 16 months.