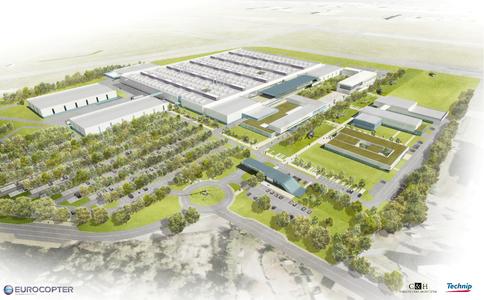 (PresseBox) ( Marignane, 12-02-10 )
The project under which the activities at Eurocopter's La Courneuve site are to be transfered to Dugny - called Project "Joséphine" and officially known as Paris-le Bourget - was granted the label "Grand Paris" at a ceremony attended by Maurice Leroy, the Minister for Cities who is in charge of Grand Paris, Daniel Canépa, Prefect of Paris and the Île-de-France region and Patrick Braouezec, Deputy of Seine-Saint-Denis.

Granting this label, which is intended to promote projects that will contribute to the identity, visibility and architecture of Grand Paris, to this project serves as recognition of the magnitude and lasting impact that Eurocopter's major industrial program will have on Paris-le Bourget, the innovative nature of which strengthens the location's attractiveness for business.

France's government lent its support to Eurocopter's transfer to Dugny of activities from the La Courneuve site, together with a portion of the EADS research & development function currently based at Suresnes, during the Paris Air Show in June 2011.

Moving to the new site will allow the world's leading helicopter manufacturer to modernize its production facilities for rotor blades. The project puts Eurocopter in a position to ensure that its industrial leadership and renowned competencies remain in France in the face of growing competitive pressures from around the world. It also gives Eurocopter a pioneering role in the future Grand Paris cluster of aviation excellence.

"Eurocopter's investment project for Paris-le Bourget is perfectly aligned with the modernization and innovation policy that the Group has been pursuing for a number of years," said Executive Vice President, Global Supply Chain Joseph Saporito. "This transfer to a new site allows us to rationalize our production facilities while also presenting us with development opportunities, especially in the areas of support and services. This will make us even more competitive in an area of industry in which Eurocopter remains the global leader."

The relocation of personnel from EADS Innovation Works - the research and technology organization of EADS - will provide additional on-site expertise to support Eurocopter activities at Dugny. "Bringing together these resources will create synergies that ensure Eurocopter remains at the leading edge of technology in rotor blade development," said Head of EADS Innovation Works Yann Barbaux.

Eurocopter is looking to invest some 120 million euros in its new industrial site, which will be located on the grounds of a former French naval air base. The future plant in Paris-le Bourget will house innovative new high-performance and multifunctional facilities, making it a driving force for the Group's strategic policy of innovation as well as a technological showcase for the region and the benchmark for environmental policies.

A number of major steps have already been taken in this ambitious project since June 2011. The engineering firm TECHNIP TPS and the architecture firm CARDETE&HUET have been selected and initial ground surveys are under way. Building permits should be issued in May 2012 and construction work is scheduled to commence in early 2013.

Established in 1992, the Franco-German-Spanish Eurocopter Group is a division of EADS, a world leader in aerospace and defense-related services. The Eurocopter Group employs approximately 20,000 people. In 2011, Eurocopter confirmed its position as the world's number one helicopter manufacturer with a turnover of 5.4 billion Euros, orders for 457 new helicopters and a 43 percent market share in the civil and parapublic sectors. Overall, the Group's helicopters account for 33 percent of the worldwide civil and parapublic fleet. Eurocopter's strong international presence is ensured by its subsidiaries and participations in 21 countries.

Eurocopter's worldwide network of service centers, training facilities, distributors and certified agents supports some 2,900 customers. There are currently more than 11,300 Eurocopter helicopters in service in 149 countries. Eurocopter offers the most comprehensive civil and military helicopter range in the world and is fully committed to safety as the most important aspect of its business.