Eurocopter's Dubai Helishow presence focuses on its helicopter capabilities for security, transport and offshore missions in the Middle East and Arabian Gulf 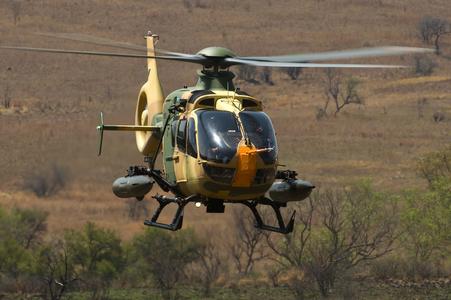 (PresseBox) ( Marignane, France, 10-11-02 )
Eurocopter will mark its 30-plus year presence in the Middle East and Arabian Gulf region with a major participation at this week's Dubai Helishow 2010, underscoring its helicopter product line's capabilities for evolving applications that include anti-piracy, counter-insurgency and border patrol missions; corporate and VVIP transportation; emergency medical airlift; search & rescue; as well as the servicing of offshore oil/gas platforms.

The company's long-term commitment to meet requirements of civil operators and armed forces in this geographic zone has resulted in more than 650 Eurocopter helicopters being flown in the Arab world by both civil and military users. Its success is backed by Eurocopter's dedication to ensuring optimised support to a growing customer base in daily operations.

For critical homeland security missions on land and at sea, Eurocopter's EC635, EC645 and AS565 Panther helicopters are highly capable aircraft that respond to current future scenarios in Middle East and Arabian Gulf.

The EC635 offers the combination of a compact helicopter with performance and manoeuvrability for use in scout, anti-piracy and public security missions. This lightweight twin-engine helicopter is being fielded in growing numbers across the Arab world, building on its current operation with the Royal Jordanian Air Force. At the Dubai Helishow, the EC635 is being exhibited as a scale mock-up, with mission equipment representing the Stand Alone Weapon System (SAWS) developed by Eurocopter and ATE.

SAWS incorporates a mission computer, an electro-optical system with TV, infrared cameras and laser telemeter (with laser designator as needed), a targeting system with a helmet-mounted sight and display, two multi-purpose weapon pylons with slaving units, and a choice of guns, missiles and unguided or guided rockets as weapons loads.

The EC645 from Eurocopter also is well tailored for the region's security and defence needs, providing excellent performance, a spacious cabin and proven reliability. The twin-engine EC645 - which is an armed derivate of the Eurocopter EC145 in service many operators around the world, including the U.S. Army - answers the increasing demand by armed forces for a multi-role helicopter that can accommodate a large range of mission equipment, including SAWS.

The larger AS565 Panther maintains the speed and manoeuvrability features required for security and defence missions, with its capabilities further enhanced by the endurance, range and unmatched capabilities of this twin-engine helicopter in overwater surveillance, tracking and search & rescue - which have been proven in Middle East operations with countries protecting their water territories like UAE or Saudi Arabia.

Having sold more than 500 helicopters worldwide in the business aviation and VIP market segments during the past four years, Eurocopter continues to be the unrivalled leader in these sectors. Its product range answers the Arab world's specific needs for reliable, efficient and capable airlift that support the region's economic development through executive and corporate applications, and for transportation in support of the oil and gas industry.

Eurocopter's tailored products for the business and VIP markets include the EC135 "l'hélicoptère par Hermès" - a fusion between design and technology, whose first customer was Falcon Aviation Services in the United Arab Emirates; and the EC145 "Mercedes-Benz Style," designed in cooperation with the Mercedes-Benz Advanced Design Studio in Como, Italy.

Eurocopter's new EC175 was created to meet the oil and gas industry's demanding requirements, providing safety and availability required for transporting large work teams to off-shore platforms and remote locations in the Middle East and Arabian Gulf. It also responds to the region's growing demands in search & rescue and emergency medical transport, and can meet commercial aviation expectations VIP and corporate transport as well.

An emerging market throughout the Middle East and Arabian Gulf is for civil emergency medical services performed by private operators, using outfitted helicopters to airlift injured patients. Eurocopter is the recognised worldwide leader in this market sector, with its EC135 and EC145 acknowledged as the helicopters of choice by leading hospitals and privately-operated providers around the globe.

Eurocopter has long been active in providing the best support to its international customer base in daily operations, and is committed to further developing its local presence in the Arab world. The company views this region as a strategic area for expansion, and is positioned to grow its footprint through actions that include new partnerships and other cooperative agreements.

The Helicopter Field Service International (HFSI) affiliate of Eurocopter has a well-established presence in Saudi Arabia, with its staff supporting a large rotary-wing fleet in the area. A UAE maintenance centre was opened in 2007 by Eurocopter with Falcon Aviation Services. The centre provides full maintenance and revision services, and reinforces Eurocopter's customer support network in the region.

Established in 1992, the Franco-German-Spanish Eurocopter Group is a Division of EADS, a world leader in aerospace, defence and related services. The Eurocopter Group employs approx. 15,600 people. In 2009, Eurocopter confirmed its position as the world's No. 1 helicopter manufacturer in the civil and parapublic market, with a turnover of 4.6 billion Euros, orders for 344 new helicopters, and a 52 percent market share in the civil and parapublic sectors. Overall, the Group's products account for 30 percent of the total world helicopter fleet. Its strong worldwide presence is ensured by its 18 subsidiaries on five continents, along with a dense network of distributors, certified agents and maintenance centres.

More than 10,500 Eurocopter helicopters are currently in service with over 2,800 customers in more than 140 countries. Eurocopter offers the largest civil and military helicopter range in the world.