Eurocopter officially hands over its 1,000th EC135 helicopter to the ADAC 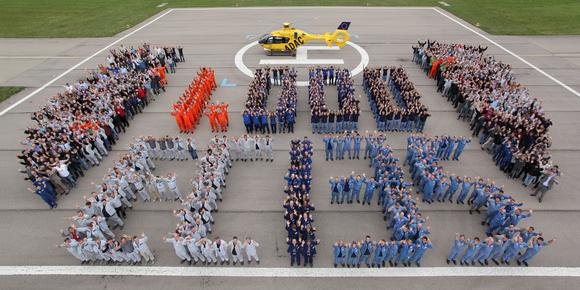 (PresseBox) ( Donauwoerth, Marignane, 11-07-20 )
Eurocopter today delivered the 1,000th EC135 to its new owner. Fifteen years after the first of these helicopters rolled off the production line at the Eurocopter plant in Donauwörth, the group's President and CEO Lutz Bertling handed the keys of the new aircraft on this landmark occasion to Peter Meyer, the President of ADAC, Germany's largest automobile club and one of Eurocopter's longest-standing major customers.

This latest purchase brings the organization's air rescue fleet up to a total of 51 aircraft, including the BK117 and EC145 in addition to the EC135. In total, these aircraft have clocked up no less than 550,000 flight hours to date and saved numerous lives.

Eurocopter's relationship with its biggest German customer in the air rescue sector extends back over more than 40 years. All the more reason, therefore, to invite high-ranking government representatives such as the Bavarian prime minister Horst Seehofer and Peter Hintze, Parliamentary State Secretary in the Federal Ministry of Economics and Technology, to attend the delivery ceremony for the 1000th EC135. In his welcome speech as host of this important event marking yet another milestone in the company's history, Group President and CEO Lutz Bertling made special reference to the significance of the EC135 to Eurocopter's German manufacturing and development location in Donauwoerth.

Right from the start of the organization's air rescue operations, the ADAC placed its confidence exclusively in helicopter technology from Eurocopter and its predecessor MBB, starting with the BO105 over 40 years ago, followed by the BK117, introduced in 1984, and the EC135 in 1996. The EC145, with its higher payload capacity, was the latest in the range of Eurocopter aircraft to join the fleet. When the ADAC air rescue service opted for the EC135 in 1996, it was one of the first operators to fly this type of aircraft, which was later to become the world's most popular light twin helicopter, with no less than 220 customers worldwide. The ADAC air rescue service, which has clocked up over 95,000 flight hours with its fleet of meanwhile 32 EC135s, is entirely satisfied with its performance.

"The EC135 has helped us to provide an air rescue service using aircraft that are cleaner, quieter and more cost-efficient. Therefore we are enthusiastic about its technical qualities. Its performance has enabled us to establish a national network of emergency medical service providers that is without parallel in Germany and serves as an example for similar services elsewhere", says ADAC President Peter Meyer, underlining the importance of this helicopter model.

The rescue aircraft that bear the ADAC's yellow livery operate out of more than 34 helicopter stations throughout Germany. Four of them operate in collaboration with neighboring countries, creating one of Europe's largest air rescue organizations. EMS helicopters such as those operated by the ADAC today form an integral part of any mountain rescue service, giving them the means to rapidly repatriate injured persons from difficult-to-access places, especially in mountainous terrain.

"The delivery of the 1000th EC135 is a special occasion for Eurocopter, which gives us added impetus to continue developing our products in close contact with the customer and contributing to the enhancement of the emergency services network. We have always given special emphasis to ensuring optimum conditions for rescue missions and the assured safety of the air rescue teams," said Dr. Bertling, speaking at the event.

The EC135 is a fine example of modern technology and innovation. In accordance with international safety requirements, it is powered by two turbine engines which enable it to accelerate to a speed of up to 254 kilometers per hour and cover an average range of 635 kilometers. The success of this Eurocopter model with customers around the world is based on its intuitive handling, extremely high maneuverability, and high availability of 98 percent. Other strong points of the EC135 are its hingeless main rotor head and shrouded Fenestron® tail rotor, which drastically reduce the level of noise and vibrations in flight (external noise is 7 dB lower than the limit prescribed by the ICAO). The EC135 is also favored for its low operating and maintenance costs, high availability and durability, and above all its versatility, which enable it to operate on diverse missions including as a training helicopter for the German armed forces, as an exclusive form of transportation for private individuals and business travellers, as a vehicle for the surveillance of offshore wind turbines and oil drilling platforms, and in many law enforcement roles.