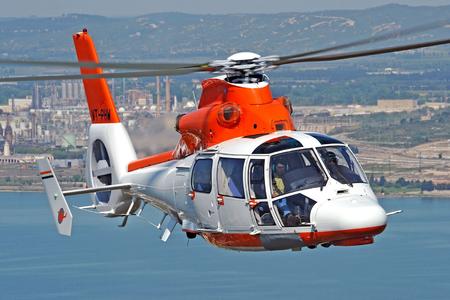 (PresseBox) ( New Delhi, 10-10-20 )
Eurocopter today inaugurated its new Indian subsidiary, which has been given the goals of expanding the world's largest helicopter manufacturer's commercial presence in this highly-promising marketplace, reinforcing its support and services network throughout the country, and further developing the company's four-decade relationship with Indian industry.

Eurocopter India Pvt. Ltd. is the 25th subsidiary established worldwide by Eurocopter and the 10th in Asia - underscoring the group's commitment of being close to its customers and contributing to the helicopter sector's evolution in key markets.

The new subsidiary is headquartered in New Delhi and has an existing facility in Bangalore for the management of industrial activity. An engineering centre will be created in Bangalore next year, along with the opening of a new commercial office in Mumbai. Eurocopter India's current headcount of 30 employees is expected to grow significantly during the coming years as the company evolves its commercial, industrial and services/support presence in the country.

"The Indian helicopter industry has great potential for expansion, given the country's expanding economy, its size and challenging terrain, as well as the industrial potential," said Eurocopter India CEO Marie-Agnès Veve. "Eurocopter is the world's first major helicopter manufacturer to establish a subsidiary in India, which underscores our objective of being a key player in this very important marketplace."

Eurocopter currently has 23 civil and government customers currently operating its helicopter products in India, with these rotary-wing aircraft performing duties that range from the support of offshore oil and gas drilling to VIP, corporate and passenger transportation. In addition to reinforcing these current markets, Eurocopter also is working with Indian institutions, companies and associations to develop new markets such as law enforcement, helicopter emergency medical services (HEMS), disaster management and utility.

Eurocopter's growing product line is well suited for the full spectrum of operations in India. Its AS365 Dauphin is the country's preferred helicopter for off-shore, para-public and government transport; while the EC135, EC145 and AS350 Ecureuil family are perfectly tailored to India's emergency medical services and law enforcement duties. The AS350 and EC130 meet Indian operational needs in passenger transport, VIP service and tourism. Eurocopter's EC225 Super Puma responds to India's deepwater offshore mission requirements and for search & rescue operations, which will be reinforced with the company's new EC175 - which has the range and payload capabilities required in India's west and east coast basins.

"The Indian helicopter sector has been growing at an annual rate of 20 percent, and our ambition is to become this country's no. 1 supplier for the civilian, government and para-public markets - which is the case for Eurocopter in the rest of the world," explained Joseph Saporito, Eurocopter's Executive Vice President - Commercial Helicopters. "The Eurocopter India subsidiary is part of our company's continuing investment in staff, resources and services to achieve this objective."

Eurocopter India also will address current and future operators' needs for maintenance and support by offering responsive, cost-effective solutions for spares management, technical documentation and training. A country-wide MRO (maintenance, repair and overhaul) network will be developed by the subsidiary, building on Eurocopter's existing local assets and partnerships within India. This includes its agreements with Pawan Hans Helicopter Ltd. - the world's largest civil operator of AS365 Dauphins - for an in-country MRO operation to service this twin-engine helicopter type, along with the installation of an AS365 full-flight simulator for flight crew training.

Another priority for the new Eurocopter India subsidiary is the expansion of the company's industrial cooperation, building on the 40-year relationship with Hindustan Aeronautics Limited (HAL) - which has produced 600 of the company's Lama and Alouette III helicopters under license. Today, HAL is manufacturing some 100 shipsets of airframe components per year for the AS550/AS350 helicopters, and is part of the Eurocopter global supply chain. HAL will continue to work with Eurocopter as a major industrial partner.

Eurocopter's existing office in Bangalore will be expanded under the management of Eurocopter India to define additional manufacturing opportunities in the country. In addition, a Eurocopter engineering centre will be created in Bangalore to support the company's design, development and industrial activities.

Eurocopter India also has set the goal of applying Eurocopter's culture of excellence in assisting the country's civil aviation authorities and operators to further evolve and mature the helicopter sector - with the focus on safety and infrastructure. This will build on Eurocopter's demonstrated track record in other countries, where it has successfully established a presence and worked cooperatively with helicopter operators and governments.