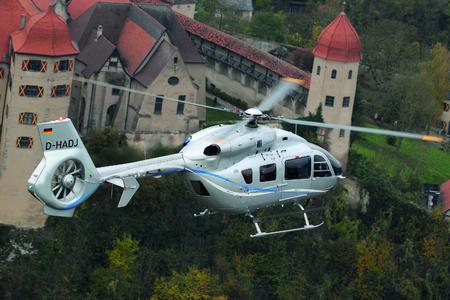 (PresseBox) ( Orlando, Florida, 11-03-07 )
The newest member of Eurocopter's helicopter family was formally launched today with the unveiling of its EC145 T2 - an evolved version of the popular twin-engine EC145 that incorporates new Arriel 2E engines, along with the company's Fenestron shrouded tail rotor, upgraded main and tail rotor gear boxes, an innovative new digital avionics suite and a 4-axis autopilot.

Today's EC145 T2 debut was at the Heli-Expo 2011 exposition in Orlando, Florida, where Eurocopter also announced launch agreements for a total of 17 helicopters from four international customers, who plan to utilize these rotary-wing aircraft in emergency medical services (EMS), oil and gas operations and business aviation.

With deliveries to begin in 2013, the EC145 T2 will offer significantly improved performance, increased flight safety, enhanced human-machine interface, improved maintainability and lower operating costs for the light-medium twin-engine helicopter. It benefits from the heritage of Eurocopter's EC145 and its BK117 predecessor, which together have logged more than 2.8 million flight hours in service around the world. "Our EC145 T2 is the latest example of our company's continued investment in innovation, which provides helicopters that are more efficient to own and operate, with higher performance and improved safety," said Eurocopter President & CEO Lutz Bertling.

The EC145 T2's most visible change is the integration of Eurocopter's proven Fenestron shrouded tail rotor, which replaces the standard two-blade tail rotor. Advantages of the Fenestron include significantly higher safety levels on the ground and in flight, along with enhanced anti-torque control efficiency, reduced power demand in forward flight, and lower sound and vibration levels.

This Fenestron application expands Eurocopter's use of the shrouded tail rotor, which currently is on Eurocopter's EC120, EC130, EC135, AS365 Dauphin and EC155 helicopters. For the EC145 T2, its Fenestron has new composite blades, a new-design tail gear box with lower maintenance costs, and incorporates a duplex tail rotor actuator and dual hydraulic circuits. It is installed in a new, damage-tolerant all-composite tail boom.

Other changes for the EC 145 T2 include a new modular avionics suite that incorporates three large primary displays and a 4-axis autopilot as standard equipment. It provides an innovative and efficient human-machine interface for flight crews, improved situational awareness and reduced pilot workload, while also offering additional mission capabilities.

The EC145 T2 launch orders announced today during the aircraft's Heli-Expo unveiling were led by Spain's INAER, which signed for 10 aircraft. Its initial helicopters will be in the EMS configuration, with flexibility provided in follow-on deliveries for other mission-specific versions of the rotary-wing aircraft depending upon INAER's operational requirements.

Additional launch customers for the EC145 T2 are three U.S.-based operators. Metro Aviation for five aircraft in EMS configuration; Leading Edge with one EC145 T2 for business aviation and Lewis Energy for one helicopter to be flown in oil and gas operations.

Eurocopter's EC145 T2 launch aircraft, showcased on the company's Heli-Expo 2011 booth, features the latest configuration for emergency medical services missions, and highlights the flexibility of the spacious cabin. The EMS interior was completed by Metro Aviation, which is based in Shreveport, Louisiana.

Established in 1992, the Franco-German-Spanish Eurocopter group is a division of EADS, a world leader in aerospace, defense and related services. The Eurocopter group employs approximately 15,600 people. In 2010, Eurocopter confirmed its position as the world's No. 1 helicopter manufacturer in the civil and parapublic market, with a turnover of 4.8 billion euros; orders for 346 new helicopters; and a 49 percent market share in the civil and parapublic sectors. Overall, the group's products account for 33 percent of the total world civil and parapublic helicopter fleet. Its strong worldwide presence is ensured by its 27 subsidiaries and participations on five continents, along with a dense network of distributors, certified agents and maintenance centers. There are 11,200 Eurocopter helicopters currently in service with nearly 2,900 customers in 147 countries. Eurocopter offers the largest civil and military helicopter range in the world.