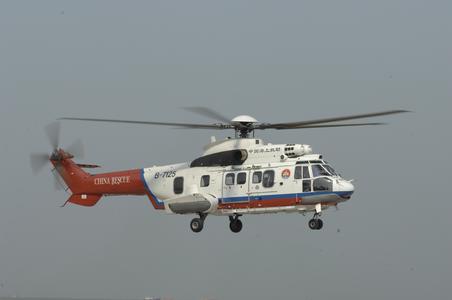 (PresseBox) ( Zhuhai, China, 11-08-05 )
The delivery of the latest EC225 to the China Ministry of Transport's Rescue and Salvage Bureau completes the fulfilment of the contract signed in 2009 for the supply of two EC225 for offshore search and rescue missions, with the earlier unit being delivered end of June this year.

The Ministry of Transport (MOT) signed on another two new Eurocopter EC225 helicopters in 2009, after having very positive experience with the first two EC225 that were delivered in 2007 and used extensively in many search and rescue (SAR) missions, including the 2008 Sichuan earthquake.

The two new helicopters are to be operated by the Rescue and Salvage Bureau (CRS) for offshore SAR missions, the first of which was delivered in end June, and the second aircraft being handed over today in a delivery ceremony in Zhuhai. The ceremony was attended by Mr. Zhang Jinshan, Deputy Director of Rescue & Salvage Bureau, China Ministry of Transport, Mr. Huo Rongmeng, Deputy Mayor of Zhuhai, Mr. Yue Jianjun, Vice President of AVIC International, as well as Mr. Bruno Boulnois, CEO of Eurocopter China.

The delivery marks a befitting start to the renewed co-operation between Eurocopter and MOT/CRS to develop SAR activities in the country. Equipped with search lights, weather radar, hoist and the most advanced avionics system, the two new SAR-configured EC225 will boost the CRS fleet operating along the Chinese coastline.

Underlining Eurocopter China's commitment to helping China develop its SAR capability, Bruno Boulnois pointed out that "Delivering the helicopters is just the first step; we will also be working closely with MOT/CRS in developing SAR technologies by sharing our technical know-how, as well as training flight personnel and operators, to build up a robust SAR network for the country."

To date, a total of 10 EC225 are flying in China, used for different missions including police and fire-fighting operations, offshore SAR and disaster relief, as well as passenger transport particularly in the oil and gas sector. Together with 17 other AS332 L1 and L2 models, Eurocopter has a total of 27 helicopters from the Super Puma family operating in the country - effectively supplying the largest fleet in this 10/11-ton twin-engine category.

Created in December 2006, Eurocopter China is a wholly-owned subsidiary of Eurocopter Group, responsible for sales and customer support activities for the company's entire range of products. In China, Eurocopter China covers a market share of 40%. With over 40 years of presence and 30 years of experience in industrial cooperation in China, more than 160 Eurocopter helicopters have been sold in the country. In order to provide quality service in proximity to Chinese operators, Eurocopter China has established a multi-based organization in Beijing, Shanghai, Shenzhen, Chengdu, Harbin, Wuhan and Hong Kong staffed with around 50 employees.