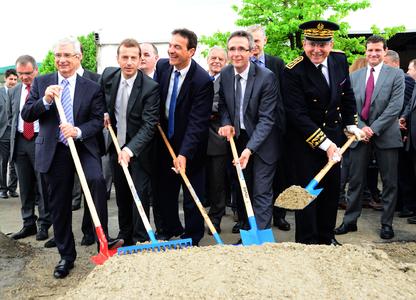 (PresseBox) ( Dugny, 13-06-20 )
The green light for the start of construction on Eurocopter's new industrial site, known as "Paris-Le Bourget", was given today by Guillaume Faury, President and CEO of Eurocopter, in the presence of Claude Bartolone, President of the French National Assembly; Vincent Capo-Canellas, Senator Mayor of the city of Le Bourget and Chairman of the Communauté d'Agglomérations; Stéphane Troussel, President of the General Council of La Seine Saint-Denis; and Philippe Galli, Prefect of La Seine Saint-Denis. The new site, at the forefront of innovation and environmental standards, will be dedicated to helicopter blade production and to research on composite materials. It is scheduled to open its doors in 2015.

Launched in 2011, the project earned the support of the French government at the last International Paris Air Show before receiving the "Grand Paris" seal of approval in February 2012. The project encompasses the transfer of activities at the La Courneuve site (730 employees) and representatives from Innovation Works - EADS' R&D department, based at Suresnes - to Paris-Le Bourget. Located in the municipalities of Dugny (93) and Bonneuil-en-France (95), the Paris-Le Bourget center of excellence will cover an area of 17 hectares and will be organized in such a way that synergies between manufacturing activities and research into composites will be enhanced.

At the laying of the first stone, Eurocopter CEO Guillaume Faury presented a 3D video model of the future site and spoke of the history of the site at La Courneuve, the location for the Group's very first assembly lines and a center recognized around the world for its expertise in the development, manufacture and repair of helicopter blades. The Group CEO also said that the new site, in its capacity as a center of excellence, will seek to create synergies with researchers graduating from specialist schools and universities in the Ile de France region and with innovative SMEs and businesses in the Greater Paris area. The proximity of the former naval aviation base at Dugny to Le Bourget Airport will also make it easier for the Group to meet and greet customers and develop its support and maintenance activities.

"The commencement of work on the Paris-Le Bourget site is an integrated part of Eurocopter's innovation strategy," said Faury. "In order to maintain our position as a leader, we must benefit from the latest industrial facilities. The move will also position Eurocopter as an industry and research center benchmark in the Ile de France region."

The move, which should be completed in summer 2015, will involve all employees at La Courneuve and most of the site's industrial capability. With more than 4,200 blades manufactured and repaired in 2012, La Courneuve is a vital link in the production chain. The transfer of these activities, which are key to the industrial process and come at a time when production is being ramped up at the Marignane assembly site, represents one of the most critical phases in the Eurocopter project.