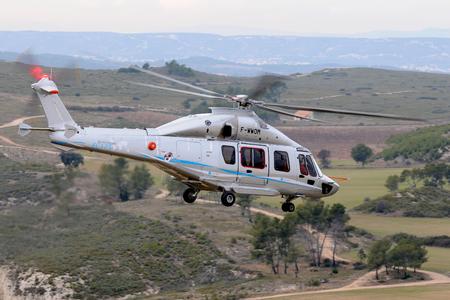 Airborne for 45', the first flight validated basic handling qualities and system functionality for the twin-engine EC175, which is a joint program of Eurocopter and Aviation Industry Corporation of China. (AVIC). It followed the no. 1 EC175 prototype's maiden flight, which occurred in December 2009 at Marignane.

The latest EC175 prototype is configured for oil and gas industry transportation operations, and includes noticeably emergency flotation gear, external life rafts, a full set of radio navigation equipment, HTAWS functionalities, HUMS, a cargo sling and hoist, along with a high-performance air conditioning system. Additionally, the helicopter is near to the final version that is scheduled for airworthiness authority certification in the second half of 2011, enabling EC175 deliveries to begin in 2012.

As the EC175's flight test and development pace continues to gain momentum, the program's industrial activity also is continuing on schedule. The production line for EC175 airframes is operational at Harbin, China, and the helicopter final assembly line at Marignane is ready to receive the initial two Chinese-produced airframes - both of which are configured for oil and gas transport missions. Delivery of the initial airframe from China to Eurocopter in France is expected before year-end, while the second will arrive first half 2011.

Integrated logistics support activity for the EC175 also has begun, and INDRA has been selected to develop the helicopter's first full-flight simulator.

"The continued track record of on-time achievements for the EC175 are further proof of the strong technical foundation of this program, as well as the excellent working relationship between Eurocopter and AVIC - which builds on 30 years of cooperation," said Eurocopter EC175 Program Director Francis Combes.

Launched in December 2005, the EC175's cooperative development has been assisted by innovative new computing tools that offer major time savings. The development and industrialization work has been equally split between Eurocopter and AVIC according to the specialties of each company. Two different helicopters will result from the common platform: the EC175 - manufactured, sold and supported by Eurocopter in Marignane; and the Z15 -produced, marketed and supported by the AVIC Group.

The EC175 is a multi-role helicopter in the seven-metric-ton weight category, which fits into Eurocopter's product range between the AS365 Dauphin (four to five metric tons) and the AS332/EC225 Super Puma (nine to 11 metric tons) aircraft families. It benefits from a mix of proven and advanced technologies, providing excellent performance and reliability.

In addition to its version for the oil and gas marketplace, the EC175 also is being developed for missions that include search and rescue and emergency medical transport, and also can meet the needs of the commercial aviation industry for VIP and corporate transport. Depending on the configuration, the EC175 can accommodate up to 16 passengers.