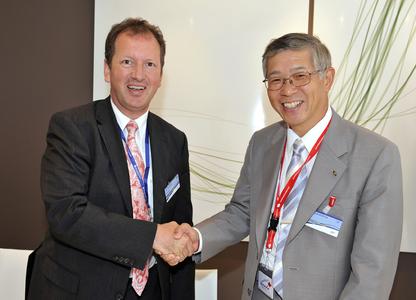 (PresseBox) ( Farnborough, 10-07-20 )
At the Farnborough Air Show today, Shigeru Murayama, President of Kawasaki Heavy Industries Aerospace Company (KHI) and Lutz Bertling, President and CEO of Eurocopter, signed a new cooperation agreement for the EC145, a new evolution from the BK117 helicopter family. After more than 30 years of successful cooperation in the BK117/EC145 programme, today's signature will extend the partnership of the two companies by another 15 years, until 2025.

Lutz Bertling, CEO of Eurocopter, stated, "The cooperation between KHI and Eurocopter in Germany works very smoothly despite the long distance, time zone difference and cultural differences. The extension of our contract by another 15 years underlines the success story of our joint product".

Until today, more than 800 helicopters of BK117/EC145 helicopters have been delivered worldwide by the two partner companies who share development and manufacturing, with three final assembly lines: one in Donauwörth in Germany, one in Gifu, Japan and one in Columbus, Mississipi, U.S.A.

The programme's biggest success to date came in 2006 when the EC145 was selected by the U.S. Army as its new Light Utility Helicopter (LUH). The contract is envisaged to comprise more than 350 LUHs in total. More than 100 helicopters, which are designated UH-72A in their U.S. Army configuration, have been delivered to the customer on time and on cost from American Eurocopter's production line in Columbus, Mississippi.

Both KHI and Eurocopter are confident of further market success of the BK117/EC145 family and future derivatives.