Eurocopter Vostok delivers first enhanced AS350 B3e helicopters for UTair Aviation, which will become the largest Ecureuil operator in Russia and CIS 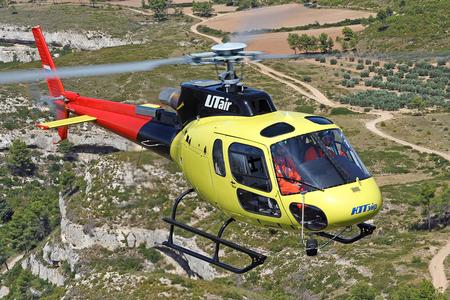 (PresseBox) ( Moscow, 12-01-12 )
UTair Aviation has received its initial three Eurocopter AS350 B3e enhanced helicopters as this leading Russian and CIS operator builds up the largest fleet of Ecureuil family rotary-wing aircraft in the region.

These AS350 B3s are among 20 aircraft ordered from the Eurocopter Ecureuil product line in 2010 by UTair, marking the biggest contract for light helicopters ever placed in Russia and CIS. Certification of the AS350 B3e variant was issued by the area's Interstate Aviation Committee (IAC) civil aviation authority in December 2011.

"We are happy to have the new AS350 B3e helicopters in our fleet," commented UTair Aviation CEO Andrey Martirosov. "These helicopters have improved flight safety and high reliability. They are powerful and more efficient, which enables us to offer a competitive product in the helicopter services market to our customers in oil and gas industry."

The AS350 B3e is an enhanced version of Eurocopter's single-engine AS350 B3, offering a high-performance helicopter capable of carrying out the most demanding missions in extreme weather and geographical conditions. Its exceptional lifting capability, high endurance, extended range and fast cruise speed make the AS350 B3e the leader in its class.

"With the AS350 B3e now certificated by the IAC, we have initiated deliveries of this latest member in one of the world's most popular helicopter families to UTair Aviation, which is an industry leader in its own right," said Laurence Rigolini, the CEO of Eurocopter's Russian-based subsidiary, Eurocopter Vostok.

Features of the AS350 B3e include the Turbomeca Arriel 2D turboshaft engine with a new-generation digital FADEC (Full Authority Digital Engine Control) and an engine data recorder for condition monitoring. The integration of Eurocopter's dual-screen Vehicle and Engine Multifunction Display (VEMD) in the cockpit allows pilots to check primary aircraft and engine parameters in one glance - thus reducing workload and enhancing safety. Eurocopter's application of composite materials for the helicopter's airframe, rotors and main rotor head gives the AS350 B3e the best protection against corrosion, thereby reducing maintenance costs.

UTair Aviation will use the new helicopters for oil and gas pipeline patrols, surveillance missions, VIP transportation and cargo airlift in Russia - including Western and Central Siberia.

The milestone 20-aircraft Ecureuil family order placed by UTair in 2010 was composed of 13 AS350 B3e helicopters, an AS350 B3, and six of the twin-engine AS355 NP versions. Deliveries from this contract began in 2011 - including one of the AS355 NPs, as well as the AS350 B3 - and will continue through 2013, with the aircraft reinforcing a Eurocopter-built fleet operated by UTair since 2006 that also includes AS355 N and BO105 rotary-wing aircraft.

Additionally, UTair Aviation is the launch customer for Eurocopter's new EC175, having placed an order for 15 of these seven metric ton-category helicopters in 2011.

UTair Aviation is the world's largest airline in terms of fleet having more than 330 helicopters of all classes. The base of the airline's fleet is made of Mil and Eurocopter helicopters. UTair Aviation is the largest helicopter service provider to the UN with which it cooperates since 1992. In Russia the main UTair customers for helicopter works are the leading oil and gas companies. In 2011, UTair carried out helicopter operations in Russia and ten foreign countries.