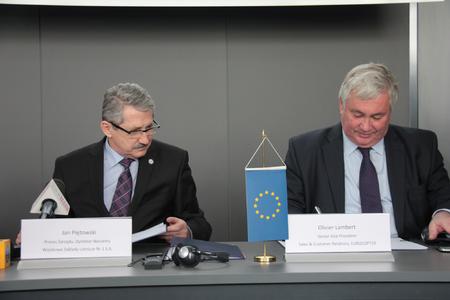 (PresseBox) ( Lodz, Poland, 13-04-04 )
Eurocopter and Turbomeca (Safran) today announced the signature of industrial cooperation agreements with Wojskowe Zaklady Lotnicze No. 1 (WZL-1) that include the creation of two separate full assembly lines within Poland for the EC725 Caracal helicopter and its Makila 2 turboshaft engines in the framework of this country's current tender for 70 new multi-role helicopters.

The agreement brings together the resources of rotorcraft manufacturer Eurocopter, engine manufacturer Turbomeca and WZL-1, ensuring a comprehensive in-country industrial work package that also includes training for locally-hired workers, along with a comprehensive maintenance, repair and overhaul (MRO) capability that will last far beyond the duration of the contract itself - and potentially be open to future export contracts.

This builds on the long-term approach of Eurocopter and its parent company EADS to cooperatively develop Poland's aviation capabilities, led by EADS' 2001 acquisition of PZL Warsawa-Okecie - the country's longest-established aviation manufacturer. The long-standing strategy is strengthened by Eurocopter's supply of more than 50 helicopters to Polish operators - including 23 EC135s for Poland's LPR (Lotnicze Pogotowie Ratunkowe) in a modernization of the country's nationwide emergency medical services network, making it one of the most modern in Europe. This cooperation has set the standard for a governmental operator transitioning from a Soviet-era rotorcraft type to a modern Western helicopter.

"As the world's leading helicopter manufacturer, Eurocopter will offer the solution best suited to meet Poland's operational mission requirements with the EC725 Caracal - which has proven its reliability and efficiency on many battlefields," said Olivier Lambert, Eurocopter's Senior Vice President for Sales and Customer Relations. "We are now positioned to provide an unmatched industrial commitment that continues a proven track record with manufacturers and operators around the world. The cooperation also exemplifies another step in the expansion of the European defense industry."

Maxime Faribault, Turbomeca's Vice President of Airframers Sales, added: "Turbomeca's partnership strategy is based on the Makila engine, benefitting from a proven experience in harsh environments, and on our strong cooperation know-how. The extensive involvement of WZL-1 within the manufacturing of the engines and their MRO support will create a long-term cooperation based on cutting-edge technologies and the sharing of technical know-how and expertise. We are fully confident in the success of this cooperative agreement."

"Our strategy is the development in aviation activities particularly within state's security and defence, but not only. The implementation of a new helicopter platform is one of our priorities covering possibly wide range of activities meaning its production, overhaul and servicing. Signing of the agreement, here, today, with Eurocopter is one of the steps of this strategy. This task is extremely important for our company's future which depends on it. It also gives many possibilities to other companies in Lodz region" - said Mr. Jan Piętowski, the President of Military Aviation Works No. 1 J.S.C.

The EC725 Caracal is a modern, multi-role 11-metric-ton-class helicopter designed for armed operations, troop transport, rescue duties and logistics support. Equipped with a five-blade main rotor system and the latest in avionics and systems, it carries up to 29 passengers in addition to the flight crew. Flight endurance is 5.5 hours with the helicopter's impressive fuel capacity.

As a rotorcraft of choice for military forces worldwide, current EC725 Caracal customers range from France, Brazil and Mexico to Malaysia, Indonesia and Thailand. Its capabilities were validated by EC725 Caracal combat deployments with French forces in Afghanistan and in supporting France's role during NATO-led operations for the Libyan military campaign and Mali. Deployed in the most challenging theatres of operations, the EC725 Caracal is today the only heavy, single platform, modern and combat proven helicopter on the market able to perform the widest range of missions.

Turbomeca (Safran) is the leading helicopter engine manufacturer, and has produced 70,000 turbines based on its own designs since the company was founded. Offering the widest range of engines in the world and dedicated to 2,500 customers in 155 countries, Turbomeca provides a proximity service thanks to its 17 sites, 28 Certified Maintenance Centers, 18 Repair & Overhaul Centers, and 90 Field representatives and Field technicians. Microturbo, the subsidiary of Turbomeca, is the European leader in turbojet engines for missiles, drones and auxiliary power units. For more information: www.turbomeca.com and www.safran-group.com. Turbomeca is part of Safran group, which has operated in Poland since 2001 via group company Hispano-Suiza. The local subsidiary of this company produces gears, housings and components for airplane and helicopter engines, and also assembles power transmissions. Located in Sedziszow, this plant has more than 500 employees.

Wojskowe Zakłady Lotnicze No. 1 Spółka Akcyjna (Military Aviation Works No. 1 Joint-Stock Company) is one of the leading European aviation companies which has been present on the market for more than 68 years. The company has established its position thanks to non-standard activities covering mainly overhauls, technical maintenance and modernization of Mi-2, Mi-8, Mi-14, Mi-17 and Mi-24 helicopters, overhauls of SO-3/W engines and the TW3-117 engines family, of aircraft and helicopter accessories and equipment. Moreover, the Joint-Stock Company performs precision measurements of turbine engine elements, application of anti-erosion coating, defectoscopy, boroscopic inspections, CNC milling, helicopter and aircraft painting, fabrication of electrical harnesses, gas and electric welding, standard heat treatment, welding and metrological services. More information can be found at: www.wzl1.mil.pl.

Established in 1992, the Franco-German-Spanish Eurocopter Group is a division of EADS, a world leader in aerospace and defense-related services. The Eurocopter Group employs approximately 22,000 people. In 2012, Eurocopter confirmed its position as the world's No. 1 helicopter manufacturer with a turnover of 6.3 billion Euros, orders for 469 new helicopters and a 44 percent market share in the civil and parapublic sectors. Eurocopter's worldwide network of service centers, training facilities, distributors and certified agents supports more than 2,900 customers. There are currently more than 11,780 Eurocopter helicopters in service in 148 countries. (www.eurocopter.com).