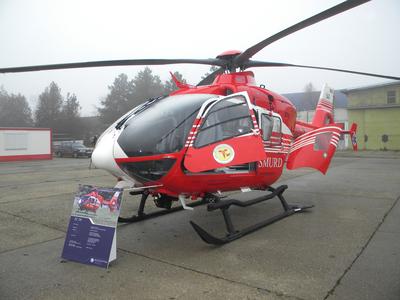 (PresseBox) ( Marignane, 11-12-15 )
A ceremony was held in Bucharest today for the delivery by Eurocopter Romania, a subsidiary of Eurocopter - the world's leading civil and parapublic helicopter manufacturer - of an EC135 helicopter to Romania's Ministry of Health. The ceremony was attended by the Romanian Minister of Health Ladislau Ritli, the Secretary of State in the Romanian Ministry of Administration and Interior Mihai Capra, His Excellence Henri Paul from the French Embassy in Romania, His Excellence Andreas Von Mettenheim from the German Embassy in Romania, as well as by Jean-Louis Mascle, CEO of Eurocopter Romania and Xavier Poupardin, Eurocopter Vice President for the EC135 program.

This is the first delivery following a contract that was awarded to Eurocopter Romania last august. The framework contract foresees the purchase of up to six helicopters by the Ministry of Health.

The EC135 will be used for emergency medical missions to assist the general population in Romania. This delivery is part of a wide-scale program launched by the government to develop its medical evacuation capabilities, which includes plans to enlarge its existing fleet.

Ministry of Health already owns two EC135 operated by the General Aviation Inspectorate of the Ministry of Administration and Interior (MAI). This new delivery confirms that the EC135 perfectly meets the stringent requirements of the medical evacuation missions.

At the ceremony, Mr. Mascle talked about the importance of this new delivery: "This is a big day for Eurocopter Romania, as the delivery of this EC135 illustrates our commitment to designing products in close cooperation with our customers and to further promoting development of emergency medical missions. It is also additional proof of the confidence the Romanian government has placed in our subsidiary."

Eurocopter Romania was founded over a decade ago in the country, and is a key player in helicopter overhaul, repair and retrofit activities. More than one hundred helicopters, including Pumas, Super Pumas, Dauphins and EC135s, from around the world have been overhauled at the subsidiary's facility. In addition to maintenance activities, EC Romania has also delivered more than 25 new and previously-owned helicopters.

The EC135 has become synonymous with modernity and innovation. In compliance with international aviation safety regulations, the helicopter is fitted with a dual-engine and can obtain speeds of up to 254 km/h, with an average range of approximately 635 kilometers. Eurocopter has had a great deal of success with this type of helicopter worldwide thanks to its excellent maneuverability, outstanding agility and high availability rate (98%). Other keys to the EC135's success are its low operating and maintenance costs, its durability and last but hardly least, the wide variety of uses it offers operators: training, surveillance missions on offshore wind parks and oil rigs as well as a wide range of law enforcement and border patrol activities.

S.C. Eurocopter Romania SA, which is a subsidiary of Eurocopter SAS, was officially created in 2002. Located in Brasov, the company has developed activities related to the civil, parapublic and military markets. Eurocopter Romania markets and sells the full range of new Eurocopter helicopters in Romania and neighboring countries and offers a close technical support to customers. Eurocopter Romania is also a key industrial center within the Eurocopter Group to perform repair/overhaul and upgrades of the Puma helicopter on the worldwide market. Since the creation of the subsidiary, more than 80 Pumas from around the world have been worked on in its facilities. Eurocopter Romania has seen a steady development over the past 10 years, maintaining a growing trend in its turnover and reaching 28.6 M EUR last year.