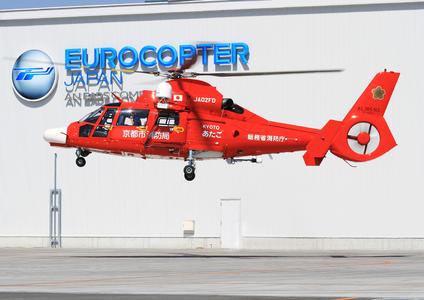 (PresseBox) ( Tokyo, Japan, 13-03-28 )
The capabilities of Japan's Fire and Disaster Management Agency (FDMA) in crisis response and coordination will be significantly improved following its introduction of a Eurocopter AS365 N3 helicopter equipped with a high-speed, real-time transmission system using Earth-orbiting relay satellites - a world's first.

This installation - called the Helicopter Satellite Communication System (HSA) - enables direct transmission to satellites without interruption from a helicopter's moving rotor blades, and relays data to ground receiving stations. Developed by Mitsubishi Electric Corporation, its retrofit integration on the AS365 N3 was handled by the Eurocopter Japan subsidiary of Eurocopter, which also is responsible for the installation's approval process with Japan's Civil Aviation Bureau. Seiryo Electric Corporation is responsible for the system's marketing and sales to the FDMA.

The HSA-equipped AS365 N3 was delivered by Eurocopter Japan today, and is expected to be operational with the Fire and Disaster Management Agency in early April. This organization provides a wide range of services in dispatching and coordinating rescue team responses to disaster situations, and is part of Japan's Ministry of Internal Affairs and Communications.

"High-speed and real-time transmission from airborne helicopters is now a reality - available first to Japan, where the 2011 Great East Japan Earthquake reaffirmed the importance of helicopters in disaster response and recovery coordination," explained Stephane Ginoux, the President & CEO of Eurocopter Japan. "With this technology now available for Japan's disaster prevention network, the next step will be offering such capability to customers in other countries - benefitting from Eurocopter's international reach and the support of its EADS parent company."

Using the HSA's satellite relay, data can be provided from helicopters even when ground-based networks are interrupted, as well as in situations where line-of-site broadcasts are hampered by mountains or tall buildings.

The AS365 N3 on which Eurocopter Japan installed the HSA is a highly popular helicopter type with fire fighting services, disaster relief organizations and police agencies, as well as the news media. Currently, 55 AS365s are operated in Japan. Eurocopter has a 60 percent market share in the Japanese fire-fighting segment, which includes operations of the BK117 helicopter - developed jointly with Japan's Kawasaki Heavy Industries.

Established in 2009, Eurocopter Japan is the Japanese subsidiary of Eurocopter, a division of EADS. It is the first foreign affiliated aircraft manufacturer to carry out direct sales, training, and customer support activities in the Japanese aeronautical sector. There are about 260 employees allocated at four bases, including Tokyo and Kobe. With more than 50 years of in-country presence, Eurocopter Japan confirms its leadership position with a 54 percent market share overall in Japan (for the turbine helicopter market, not including defense).

Established in 1992, the Franco-German-Spanish Eurocopter Group is a division of EADS, a world leader in aerospace and defense-related services. The Eurocopter Group employs approximately 22,000 people. In 2012, Eurocopter confirmed its position as the world's No. 1 helicopter manufacturer with a turnover of 6.3 billion Euros, orders for 469 new helicopters and a 38 percent market share in the civil and parapublic sectors. Overall, the Group's helicopters account for 33 percent of the worldwide civil and parapublic fleet. Eurocopter's strong international presence is ensured by its subsidiaries and participations in 21 countries. Eurocopter's worldwide network of service centers, training facilities, distributors and certified agents supports more than 2,900 customers. There are currently more than 11,780 Eurocopter helicopters in service in 148 countries. Eurocopter offers the most comprehensive civil and military helicopter range in the world and is fully committed to safety as the most important aspect of its business