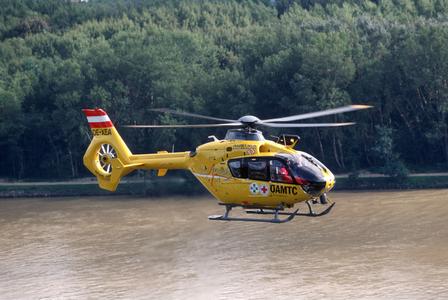 (PresseBox) ( Marignane, Donauwörth, 10-10-26 )
During an official ceremony at the mid point of 2010, Eurocopter's sales manager for Central Europe Thomas Hein handed over a certificate to Alexander Wolf and Reinhard Kraxner, the two co-CEOs of ÖAMTC Air Ambulance Services, for the accomplished 100,000 flight hours with the EC135 at the Austrian company's headquarter in Vienna. ÖAMTC is one of the largest private operators of the EC135, with a fleet of 28 aircraft. With these achieved flight hours and about 15,000 operations every year, the company sets benchmarks for successful operations with EMS helicopters. ÖAMTC recently flew its 200,000th mission with an EC135 helicopter, an impressive performance that enables Austria to enjoy one of the world's best air ambulance services in the world. An EMS helicopter can be deployed to almost any location in Austria within 15 minutes, greatly improving chances of survival.

This "round" figure is also representative of the many years of close cooperation between the two companies - ÖAMTC and Eurocopter. Back in 1983, ÖAMTC acquired its first Eurocopter EMS helicopter, an AS355F named "Christophorus 1". Soon after, ÖAMTC was serving six rescue bases with its helicopters. As part of its fleet modernization program which began in 1997, ÖAMTC successively introduced the EC135 for all its bases and bought an initial batch of seven. In September 2000, the Austrian government decided to privatize helicopter EMS entirely. The ÖAMTC took over the bases which had previously been operated by the government with the most modern rescue helicopter in the market, the EC135. Over the years, an additional 21 helicopters were purchased.

Bestseller EC135 - versatile, quiet, safe and cost-efficient
The EC135 stands for modernity and innovation: The worldwide success of this Eurocopter aircraft is assured thanks to the helicopter's easy handling, its excellent maneuverability and its high availability (98 percent). Other advantageous features of the EC135 are its bearingless main rotor and the use of advanced materials. The aircraft's shrouded Fenestron® tail rotor reduces noise levels and vibrations during operations decisively (the external noise level is 7 db below ICAO limits). This makes the EC135 the perfect choice for Air Ambulance missions near or in urban areas and guarantees cost-efficient missions and the highest possible safety for crew and patients.

ÖAMTC took a very foresighted decision in 1997 when it was one of the first customers to opt for the EC135, which is wholly manufactured at Eurocopter's German site in Donauwörth. Since then, this helicopter has become a bestseller in the world market for light, twin-engine helicopters, especially in the EMS and law enforcement sectors. Approximately 100 aircraft of this type rolled off the Eurocopter production lines in 2007, 2008 and 2009. In total, over 900 EC135s have been delivered to customers all over the world.

Um in der Produktion konstant höchste Qualität zu gewährleisten, setzt Benteler auf durchdachte und stabile Produktionsprozesse. Ein wichtiger Baustein ist hier die vorausschauende Instandhaltung von Maschinen, auch bekannt als „Predictive“ oder „Smart Maintenance“, mittels großer Datenmengen. read more
The publisher indicated in each case is solely responsible for the press releases above, the event or job offer displayed, and the image and sound material used (see company info when clicking on image/message title or company info right column). As a rule, the publisher is also the author of the press releases and the attached image, sound and information material.
The use of information published here for personal information and editorial processing is generally free of charge. Please clarify any copyright issues with the stated publisher before further use. In the event of publication, please send a specimen copy to service@pressebox.de.