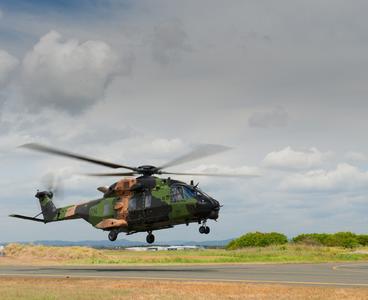 Australian Aerospace's production facility on Brisbane Airport is assembling and delivering 46 MRH90s to replace Army and Navy Black Hawk and Sea King helicopters. Since the helicopter's entry to service, Australian Aerospace, its industry partners and the Defence Materiel Organisation (DMO), have been working to introduce the new capability into service.

On 23 November, Australian Aerospace and the Commonwealth of Australia signed a Deed of Agreement, encompassing a remediation plan to overcome a number of identified issues, including an engine failure and oil cooler fan issues, and ensure timely deliveries of the MRH90s. One week later, Defence accepted the 14th helicopter.

"The delivery of the 15th MRH90, just two weeks after signing the Deed of Agreement is very encouraging indeed," said Dr. Jens Goennemann, Chief Executive Officer of Australian Aerospace. "It augurs well for the Program's future and is a strong sign of our commitment to delivering the capability to Defence".

Capable of carrying 2 pilots, 2 loadmasters and 18 combat troops up to 900km at speeds in excess of 300 km/h, the MRH90 is a fly-by-wire, all-composite construction, medium-lift helicopter with the highest crash-worthiness standards. Chosen by Australia over competing types as part of a program to modernise and rationalise its military helicopter fleet, the MRH90 is the world's most advanced helicopter in the ten-tonne class.

With more than 1100 staff in Australia and New Zealand, Australian Aerospace has access to the financial strength and expertise of Eurocopter and the EADS Group.