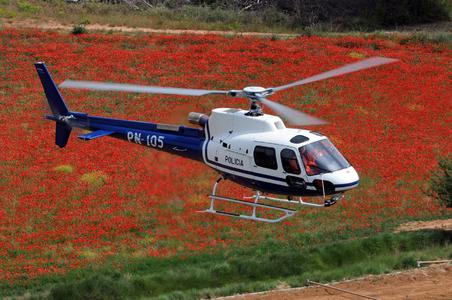 (PresseBox) ( Le Bourget Paris, 11-06-22 )
Eurocopter is celebrating the delivery of the tenth AS350 B3 Ecureuil (Astar) helicopter to Angola's National Police Force's Helicopter Unit, strengthening its airborne law enforcement capabilities and at the same time, expanding its modern and versatile rotor wing fleet.

This latest delivery concludes the 2009 contract to supply a fleet of 10 AS350 B3s delivered between June 2009 and May 2011. It reinforces the Angola National Police Force as one of the best-equipped law enforcement agencies in Africa.

"The AS350 B3 provides a very efficient law enforcement solution in our daily operations," says the official representative of the Angola National Police Force.

Angola, which is situated in South Western Africa is a minerals and oil-rich country with a population of around 18.5 million people. The Police Helicopter Unit's choice of Eurocopter AS350 B3 aircraft was based on their superior operational capability and rugged capability to operate in hot, high and dusty conditions.

Range and payload was a primary consideration as the Unit required helicopters capable of patrolling both the dense built up area around the capital city, Luanda, but also to cover smaller towns and communities spread over large areas - Angola is twice the size of Texas, with 5,198 km of land boundaries and a 1,600km long Atlantic Ocean coastline.

At the same time, Angola's climate, which varies from cool, dry and semi-arid to hot, humid and rainy, demanded the performance and reliability offered only in its category by the AS350 B3. Topping it all, the AS350 B3, which holds world altitude records*, was the logical choice for a helicopter to meet the requirement to operate at sea level and, without compromising its mission capability, on the vast inland plateau, where terrain elevation reaches as high as 2,000m above sea level (approx. 6,000ft AMSL).

Powered by its Turbomeca Arriel 2B1 engine, which generates greater power, the AS350 B3 can carry heavier and versatile payloads (including sling load capacity) and fly at a higher cruising speed in comparison with other similar size machines.

The AS350 B3s join the Helicopter Unit's growing and exclusively Eurocopter fleet, which currently includes six Dauphin AS365 N2 (with emergency medical service capabilities) and 15 AS350 B2/B3 used primarily for surveillance missions.

Angola, which has been one of the world's fastest growing economies, established its National Police Force 35 years ago when the country achieved independence. Its Helicopter Unit was created in 1992, initially to provide additional security during the country's first multi-party elections and since which, it has played an integral role in crime prevention and law enforcement in the country, especially since the end of the civil war in 2002.

Over the past decade, the AS350 B3, with its outstanding capabilities, has become the reference helicopter for airborne police units in the Southern Africa Development Community (SADC) bloc where they are also in operation in Namibia, Botswana and South Africa.

The powerful, high-performance AS350 B3 is designed to carry out the most demanding missions in the most extreme weather and geographical conditions. Its exceptional lifting capability, high endurance, extended range and fast cruise speed make the AS350 B3 the leader in its class. The popularity of Eurocopter's AS350 in a law enforcement role can be attributed to its ability to meet all of a police flying unit forces' main requirements. The AS350 B3 is a member of Eurocopter's rugged and proven Ecureuil family. Some 5,000 Ecureuil have been delivered in 98 countries for some 1,600 operators. These aircraft have cumulated more than 21 million hours.