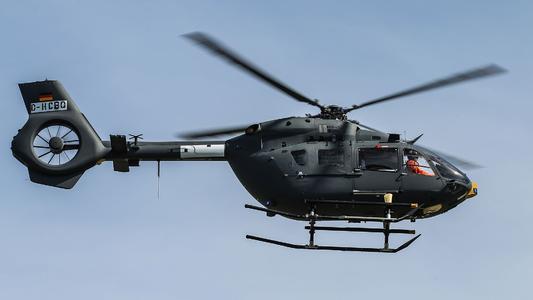 
Airbus Helicopters will be presenting four aircraft on the static display.

The full scale representative model of the all-new highly innovative H160 will be presented for the first time in Europe. The H160 brings form and function together in a highly stylized rotorcraft, which integrates as many as 68 different Airbus Helicopters-patented technologies including the distinctive Blue Edge blades ®, canted Fenestron ® and biplane stabilizer™. Its payload lift, range and efficiency make this helicopter ideally suited for a wide variety of uses, including oil and gas operations; public services, air medical and coast guard duties; along with commercial transport, private and business aviation.

A full-scale representative model of the newly certified H145M will also be showcased. This aircraft has an increased maximum take-off weight of 3.7 metric tons, and can be equipped with mission equipment that includes a pintle-mounted door gun and the ability to carry weapons on external pylons; electro optical/infrared sensors with targeting capability; as well as military avionics for communications, navigation and flight management.

A bestseller, with 60 aircraft currently in service worldwide and more than 430,000 flight hours, the H225M has proven its capabilities as a heavy, single-platform, modern and combat-proven helicopter on the market able to perform the widest range of missions, from combat search and rescue to special operations, tactical transport and medical evacuation, along with a full range of maritime roles. Since 2006, the H225M has been deployed in Lebanon, Afghanistan, Chad, Ivory Coast, Central African Republic, Somalia and Mali by the French Army. Brazil, Mexico, Malaysia, Indonesia, and Thailand also rely on the H225M for their most demanding missions.

The H135, certified in October 2014, is the reference helicopter for emergency medical services, thanks to its performance, its cabin flexibility and overall capabilities. Unique features such as the shrouded Fenestron® rear rotor make the H135 more silent, efficient and safer for operators to use.

The NH90 TTH Caïman from the French Army Aviation (ALAT) will be displayed at the NHIndustries booth and will be performing flight demonstrations every day. The NH90 TTH has been operationally deployed in Afghanistan by Germany and Italy for tactical transport and medevac missions and in Mali by France for tactical transport missions, while the MRH90 has been deployed by Australia in the Philippines and the Vanuatu Islands. The NH90 TTH crews appreciate the maneuverability of the helicopter, its power to weight ratio, its outstanding endurance, and its capability to perform a wide spectrum of missions. It is fitted with a state-of-the-art mission system to ensure mission success day or night and a self-defense suite able to detect and counter the main threats on the battlefield.

The French General Directorate for Armament's (DGA) booth will host a Tiger and a NH90 NFH, two aircraft that have been successfully deployed in operations. Since July 2009, Tigers have been deployed continuously by the French Army in different areas, such as Afghanistan, Libya and Sahel. While the deployment in Afghanistan and Libya has come to an end, Tigers are still supporting missions in Sahel, where, despite the difficult operating conditions, the Tiger has shown a very high level of availability and logged more than 2,050 flight hours since the start of deployment in January 2013. The NH90's NFH version is the primary maritime weapon system in a surface fleet's defense. Operating from shore bases or on surface vessels up to sea state 5, the helicopter is tailored for both anti-submarine (ASW) and anti-surface unit (ASuW) warfare. Search and rescue operations can be performed in either of these configurations.