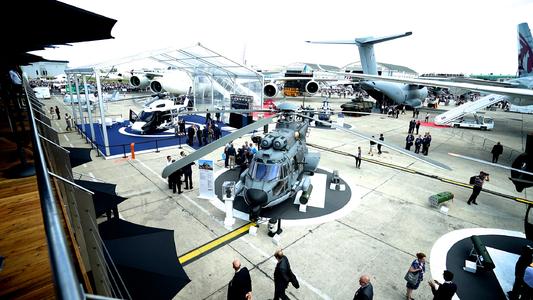 
Airbus Helicopters secured orders for 52 rotorcraft during this year's Paris Air Show, with the H175 seeing its largest order to date. Milestone Aviation Group increased its combined orders and options for this helicopter to 28, taking the order book for the super medium to nearly 100 units. The H175 was designed to meet the oil and gas industry's most demanding transportation requirements, offering new levels of comfort and cost-efficient operation.

Mexican operator Transportes Aéreos Pegaso established a framework agreement to acquire 10 H145s, becoming the first Latin American customer for this four-ton-class twin-engine rotorcraft. The Argentinian Armed Forces signed an MOU for 12 H125 in view of renewing the AS315B Lama fleet of the Air Force and the Army.

Commercial news from Asian customers included a PT Dirgantara Indonesia order for two AS365 N3+ Dauphin helicopters for search and rescue missions and a contract signature to overhaul two of Southern Vietnam Helicopters' (VNHS) AS332 L2s, which will include a new enhanced ground proximity warning system (EGPWS). To be performed by the Airbus Helicopters customer center in Malaysia, this work is to begin in the third quarter of 2015.

Capturing the headlines at the Paris Air Show's Le Bourget Airport venue was the company's announcement that a two-year X6 concept phase has begun, enabling the assessment of major marketing, architecture and design choices for this twin-engine aircraft - which will be supplemented by a substantial dialog with customers worldwide to validate the X6's value creation for their operations.

With a service entry anticipated in the 2020s, the X6 initially targets oil and gas missions, and also will be well suited for such applications as search and rescue, corporate airlift and VIP transportation. As a member of Airbus Helicopters' H-generation rotorcraft family, the X6 will build on the design advances from its recently-unveiled H160 medium-lift helicopter.

The distinctive H160 also was at the center of attention during the show, being presented for the first time in Europe in the form of a full-scale mock-up that was located in front of the Airbus Group exhibit pavilion. In parallel, Airbus Helicopters announced the H160 has begun its flight campaign with the first two flights having occurred on 13 and 17 June at the company's Marignane, France headquarters.