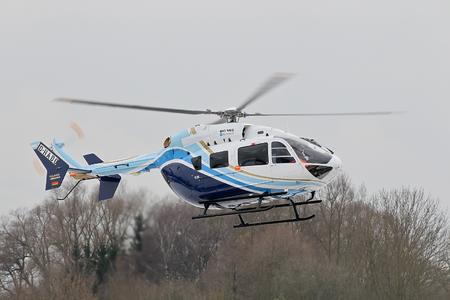 (PresseBox) ( Marignane, France, 14-03-21 )
For the first time in Latin America under its new branding, Airbus Helicopters will display its efficient and adapted product line-up at next week's FIDAE International Air and Space Fair, featuring rotorcraft flown by a cross-section of Latin American operators to underscore the company's leadership in this portion of the world.

Maintaining an overall 40 percent market share in Latin America during the past five years with a deployed fleet of more than 1,350 rotorcraft across the region, Airbus Helicopters has developed a diversified customer base, as well as a strong industrial presence - with 1,200 employees assigned to its subsidiaries in Brazil, Chile and Mexico for production, maintenance and support.

Airbus Helicopters' 12 different rotorcraft types position the company as the only manufacturer covering Latin America's full operational requirements, from lightweight to heavy-lift; with designed-in performance for duties in the region's unique conditions, from jungle and hot environments to high altitudes in the Andes.

The product line's versatility and efficiency is underscored by Airbus Helicopters' Ecureuil family: more than 600 are in service across the region, having logged over 130,000 flight hours in missions that include passenger transport, mining support, power line maintenance, fire-fighting and the transportation of external loads.

Exhibited at FIDAE will be a utility-configured single-engine AS350 B3 Ecureuil from a Chile based aerial services operator that specializes in mining and energy, construction, civil work, extreme sports, tourism and filming.

Other lightweight helicopters on display at FIDAE are the EC120 and the EC130 T2 - the latter being the first of this type to arrive in the South Cone. Retaining the EC130 helicopter's external lines, this latest Ecureuil family member benefits from Airbus Helicopters' continued investment in its products - with approximately 70 percent of the EC130 T2's airframe structure modified. New features include a more powerful Arriel 2D turboshaft engine and upgraded main gearbox; along with a cabin interior structure redesign and a cockpit update for enhanced man-machine interface.

The EC145, also showcased at FIDAE, is one of the most popular light twin-engine helicopter models, and is relied on around the globe for public security and disaster relief missions. With more than 500 delivered to date, this helicopter serves in the police fleets of 26 countries worldwide. Powerful, versatile and perfectly suited to the region's terrain, the EC145 has become a reference for public services missions in Latin America, where it is being operated by the public services of Argentina, Brazil, Mexico - and more recently Bolivia and Peru, with recent purchases for four and five aircraft, respectively.

The Dauphin family's EC155 B1 arrives in the region to set new standards for private aviation in terms of style and comfort. Presenting the biggest cabin in its class, the EC155 B1 offers a unique combination of elegance, comfort, silence and speed and, it is well position for the growing trend among private operators for large-cabin helicopters. High-end options include soft leather club seats, power sources for laptops, adjustable reading lights, cabin air conditioning, as well as satellite communications and in-flight entertainment for an exclusive flight experience.

Completing Airbus Helicopters' flight-line presence at FIDAE is the latest Cougar family member: the AS532 ALe version of the workhorse Super Puma family that incorporates the EC225 version's glass cockpit and four-axis autopilot. Of the 870 Super Puma/Cougar helicopters delivered to date, more than 100 are in service in Latin America, with 60 others on order. Most of the continent's armed forces are operating this family for a wide variety of missions that range from assault and combat to special operations, tactical transport, SAR, medical evacuation and the transport of high-ranking officials.

The Cougar family is present in Argentina, Bolivia, Ecuador, Brazil, Chile, Mexico and Venezuela - with Airbus Helicopters' Helibras subsidiary in Brazil producing the EC725 version for the Brazilian Armed Forces.

Airbus Helicopters' participation in this year's FIDAE is the company's first at the biennial show in its new branding, underscoring its commitment toward customer satisfaction, quality, safety and competitiveness.

Airbus Helicopters, formerly Eurocopter, is a division of Airbus Group, a global pioneer in aerospace and defense related services. Airbus Helicopters is the world's No. 1 helicopter manufacturer and employs more than 23,000 people worldwide. With over 40% market share in civil and parapublic sectors, the company's fleet in service includes some 12,000 helicopters operated by more than 3,000 customers in approximately 150 countries. Airbus Helicopters' international presence is marked by its subsidiaries and participations in 21 countries, and its worldwide network of service centers, training facilities, distributors and certified agents. Airbus Helicopters' range of civil and military helicopters is the world's largest; its aircraft account for one third of the worldwide civil and parapublic fleet. The company's chief priority is to ensure the safe operation of its aircraft for the thousands of people who fly more than 3 million hours per year.