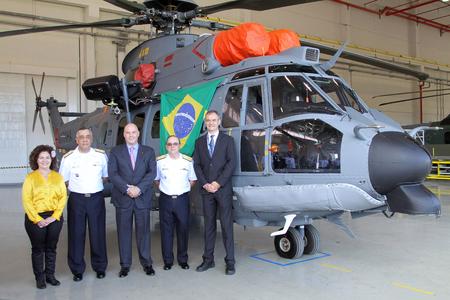 (PresseBox) ( Itajubá, Brazil, 14-06-17 )
The first "built-in-Brazil" EC725 was provided to the Brazilian Navy last Friday, marking a major milestone in Airbus Helicopters' cooperation with the country to supply mission-ready multi-role rotorcraft for its three military services and to develop a capable national helicopter industry.

"The delivery is another key achievement in a program that remains on schedule and within the contractual budget, underscoring the dedication of all partners to its success," said Airbus Helicopters CEO Guillaume Faury. "It also highlights our long-term commitment to dual goal of enhancing Brazil's heli-lift capabilities while developing a world-class rotorcraft industry in the country."

Brazil's armed forces have received a total of 12 EC725s to date, with the previous 11 helicopters either supplied from Airbus Helicopters' production site in France or partially assembled at Helibras' Itajubá facility.With this latest delivery, the Brazilian Navy now has three EC725s in its inventory, while another five are operated by the Air Force, and four by the Army. These helicopters have logged a combined total of 5,000 flight hours with the three military services.

The milestone rotorcraft provided to the Brazilian Navy went through its complete assembly at Itajubá - including the integration of mission equipment, flight line activities and industrial acceptance.

"The cooperation between France and Brazil gave rise to extraordinary results" said Eduardo Marson, CEO of Helibras. "The helicopter was assembled on-site by highly committed Brazilian and French teams, who contributed to the success of another milestone in the transfer of technology and in nationalizing the EC725's production".

As part of developing an in-country supply chain for the EC725, Helibras already has signed contracts with 16 Brazilian companies for the supply of components, parts and services. Ultimately, EC725s supplied to the Brazilian armed forces will have 50 percent domestic content.

The EC725 is Airbus Helicopter's latest member of its Super Puma/Cougar helicopter family. As a highly capable twin-engine helicopter in the 11-metric-ton category, it is designed for multiple missions, including combat search and rescue, long-range tactical transport, aeromedical transport, logistic support and naval duties.