A high-level endorsement for the new Eurocopter Kazakhstan Engineering joint venture, which is to assemble and support EC145s in Central Asia 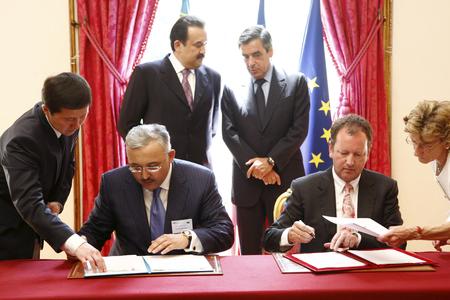 (PresseBox) ( Paris, France, 11-06-27 )
An agreement formalizing the industrial and commercial scope of the Eurocopter Kazakhstan Engineering joint venture - which will assemble and customize EC145 helicopters at a new facility in Astana - was signed in Paris today by Eurocopter President & CEO Lutz Bertling and Bolat Smagulov, President of Kazakhstan Engineering, in the presence of French and Kazakh prime ministers François Fillon and Karim Massimov.

The accord marks an important milestone in the joint venture's establishment, which this year plans to assemble and deliver the first six of 45 EC145s to be acquired through 2016 by the Kazakh government.

Eurocopter Kazakhstan Engineering also will develop local maintenance and training capabilities to support EC145 operations in the country, as well as across the new customs union zone created by Kazakhstan, Russia and Belarus last summer, and throughout the entire Central Asian zone. Additionally, the organization will oversee sales activities these areas.

"This joint venture holds particular importance for Eurocopter, as it gives us a key presence in a rapidly-developing country," Bertling said. "We foresee many new opportunities for the EC145 in this part of the world, based on the helicopter's capacity for missions in support of the oil and gas, mining, parapublic, government and corporate sectors, and in other applications as well."

The first six EC145s to be assembled at Eurocopter Kazakhstan Engineering's facility at Astana Airport are to be utilized by Kazakhstan's Defense Ministry and the Ministry of Emergency Situations for such operations as medical airlift and search & rescue missions.

"As the first cooperation of this magnitude between our country and any helicopter manufacturer, Eurocopter Kazakhstan Engineering will help develop new expertise in high-technology industries," Smagulov stated.

The multi-mission EC145 is at the top of its class in the medium-sized, twin-engine helicopter category. Bringing together Eurocopter's latest developments in advanced cockpit design, avionics and rotor system, this helicopter is perfectly adapted for the most demanding operational conditions, especially in the very low temperatures that can be found in Kazakhstan (certified at -45°).

Recommend A high-level endorsement for the new Eurocopter Kazakhstan Engineering joint venture, which is to assemble and support EC145s in Central Asia press release