Strengthening of the Group Executive Committee, in accordance with the Group's strategy 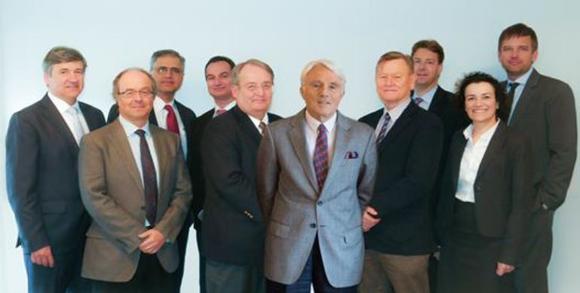 ESI is pleased to welcome to the Group and to nominate to the GEC, from March 1, 2016, Christian Tanasescu as Executive Vice President Systems Modeling and Data Analytics. He will notably be in charge of the recently-integrated technologies of the future (’2nd Machine Age’).

The scope of the GEC is also expanded to include the Executive Managing Director of EMEA (Europe, Middle East and Africa and including India and South America), Marco Gremaud. Appointed to this role from 2014, and now joining the GEC, he is accountable for assuring strategic alignment and synergetic actions across his scope of responsibility.

Christian Tanasescu holds a Master’s Degree in Computer Science from the Polytechnic Institute of Bucharest (Romania). Prior to joining ESI Group Christian Tanasescu served in several executive roles in the High Performance Computing and Data Analytics markets. After spending 3 years at Siemens-Nixdorf, he joined Silicon Graphics as the head of the supercomputing applications and benchmarking organization. In 2009 he became Vice President of Applications and Engineering at SGI in the US, and was later appointed Vice President and General Manager of their Visual Analytics business unit.

Christian brings to ESI Group his strong experience in the development and marketing of technologies of the future, and notably big data visual analysis and machine learning. With an extensive market knowledge, he will contribute to strengthening ESI’s positioning and to the development of strategic innovation partnerships, enabling the coupling of 3D/4D virtual prototyping with the 0D/1D systems, and the piloting of interactions with the exponential flows of information coming from the ‘Internet of Things’.

Christian joined the Group as Managing Director when the virtual reality solution IC.IDO was acquired in 2011. His operational expertise and strategic knowledge of industrial needs will strengthen synergies between the Group’s longstanding know-how in virtual prototyping and the disruptive, immersive and collaborative solution of virtual reality.

Marco joined ESI in 2002. With a strong international experience in CAE sales and marketing development, Marco has for the past two years focused on the Group’s consolidation in Europe and on its evolution by amplifying regional synergies and pursuing the promotion of innovative solutions and strategic partnerships.

ESI is a world-leading provider of Virtual Prototyping software and services with a strong foundation in the physics of materials and Virtual Manufacturing.

Founded over 40 years ago, ESI has developed a unique proficiency in helping industrial manufacturers replace physical prototypes by virtually replicating the fabrication, assembly and testing of products in different environments. Virtual Prototyping enables ESI's clients to evaluate the performance of their product and the consequences of its manufacturing history, under normal or accidental conditions. By benefiting from this information early in the process, enterprises know whether a product can be built, and whether it will meet its performance and certification objectives, before any physical prototype is built. To enable customer innovation, ESI's solutions integrate the latest technologies in high performance computing and immersive Virtual Reality, allowing companies to bring products to life before they even exist.

Today, ESI's customer base spans nearly every industry sector. The company employs more than 1,000 high-level specialists worldwide to address the needs of customers in more than 40 countries. ESI is listed in compartment C of NYSE Euronext Paris and is granted "Entreprise Innovante" (Innovative Company) certification since 2000 by Bpifrance. ESI is eligible for inclusion in FCPI (venture capital trusts dedicated to innovation) and PEA PME.

Prediction of material properties, cracks and deformations of welded structures

Simulation in child car seat design – Why do it?

Recommend Strengthening of the Group Executive Committee, in accordance with the Group's strategy press release