Alain de Rouvray, ESI Group’s Chairman and Chief Executive Officer, commented: "The success of ESI Group’s commercial offering built on Immersive Virtual Engineering has been fully confirmed in 2016. The growth in the Licensing activity, which was particularly robust in Asia, and the real momentum built up in high value-added Services in 2016, reflect the growing demand among industrial companies to support their transformation towards the ‘Industry of the Future’. This represents an endorsement of ESI’s "Product Performance Lifecycle" (PPL) approach: a distinct disruption which allows industrial customers to address the complete lifecycle of their products beyond certification, through piloting of performance in operation, including in the "assisted" or "autonomous" Internet connected mode (IoT). This highly differentiating vision is based on the transformation of the ‘Virtual Prototype’ into its data driven "Hybrid Virtual Twin", which largely benefits from the integration of the numerous innovative technologies recently acquired.

In particular, ESI ITI, developer of (0D-1D) modeling solutions for physical and mechanical systems, is actively contributing to widen our user base to new players involved in product creation, working in the early steps of modeling and analyses, before tackling the detailed simulation (3D-4D) models of the system key components.

With the compelling trend of democratization of digital simulation, we are convinced that it is indeed necessary to extend ESI Group’s positioning into complementary, flexible and inexpensive entry level solutions. This explains why we further strengthened our range of solutions through the recent acquisition of Scilab Enterprises, noted for their first-class "open-source" and "cloud-based" analytical modeling solutions that are very widely used by industry engineers, academics and researchers around the world prior to any elaborate digital simulation (0-1D to 3-4D).

Lastly, we remain confident in the Group’s ability to harness the growth resulting from the transition to the Smart Digital Factory and Industry of the Future."

Quarterly sales came to €57.7 million, up 5.0% on the fourth quarter of the previous financial year. This includes revenue from newly acquired companies that amounted to €1.5 million, with the bulk deriving from ESI ITI GmbH, which was acquired in January 2016. Currency effects, which were more moderate than in previous quarters, had a positive impact of €0.3 million, with the Japanese yen weakening towards the end of the year and the pound sterling continuing well below its 2015 level against the euro.

Sales from the Licenses activity rose 2.6% to €48.7 million. As a reminder, performance in the period was affected by the movement of a €1.4 million contract in Asia previously recognized in the fourth quarter but now recognized in the previous quarter (Q3). This shift has influenced the seasonality of our Licenses activity and better balances the first three quarters of the year.

Full-year sales totaled €140.6 million up 12.7%. Acquisition-related revenue—mainly from ESI ITI GmbH—amounted €6.4 million, reflecting the implementation of initial commercial synergies. The positive impact of currency effects over the financial year came to €2.1 million. The key factor was the favorable trend in the Japanese yen, which was offset to some extent by depreciation of the pound sterling during the period. The product mix reflects the strong performance in Services, which contributed 23% of total sales, compared with 22% in the previous financial year.

Licenses activity recorded annual sales of €108.3 million, up 11.6% compared with the previous financial year. This momentum was driven by the growth in the installed base (+13.0%), that holds a high repeat business rate of 89.1% measured for the organic perimeter and at constant exchange rates. New business generated €17.9 million in revenue, up 3.0% on 2015.

Services revenues surged 16.5% to €32.2 million. This boost was driven by continued expansion in engineering studies (+16.8%), ESI Group’s core business, and the strong growth in special projects (+57.1%). The latter comprise co-creation and methodological transformational projects related to the newly acquired and emerging technologies.

In 2016, the Asia-Pacific area outperformed other regions, contributing 39% of total revenue, compared with 36% in the previous year. At the same time, business volume in the Americas shrank relatively to 16% of total sales versus 19% in 2015. Europe’s contribution remained stable at 45% of the total, compared with 46% in the previous financial year.

The BRIC countries generated 13.3% of sales compared with 12.6% in 2015. Healthy performance in China and India was among the factors that contributed to this increase.

Despite the challenging environment, the three-year agreement with Volkswagen Group was renewed with an expanded perimeter for the ninth consecutive time. Renault-Nissan also renewed its three-year joined contract for the second time. These renewals attest to the compelling nature of ESI’s virtual engineering solutions. These provide a unique multi-domain and multi-physics environment that enables customers to virtually manufacture and assemble the essential components of a product, using a single core model, shared in real time, that captures the level of physical information needed to meet industrial and regulatory (certification) requirements. The collaboration with Honda, another flagship partner of ESI, has also been strengthened, reaffirming the strategic ties between ESI Group and the automotive sector, which is leading the transition to the digital factory.

The Consumer Electronics Show (CES) in Las Vegas – joined for the first time by ESI - was also an opportunity for ESI Group to showcase its digital technology solutions for testing driver assistance systems and autonomous vehicles. ESI Group’s disruptive technology, combined with supplementary ICT and IoT innovations, is perfectly suited to meet industrial challenges. The technology featured at CES will help sustain the transformation underway in the Automotive sector.

ESI Group has strengthened its presence in the ‘Aeronautical and Aerospace’ segment, which has now become its second-largest sector of activity after Automotive. In a sign that this sector is gradually embracing the digital factory model, the orders booked for innovative Services posted a strong increase over the financial year.

Integration of the newly acquired companies continued successfully in 2016, providing further evidence of ESI Group’s know how in that domain.

The steep increase in the sales recorded by ESI ITI GmbH, the leader in 0D-1D mechatronic and multi-domain systems with its SimulationX solution, reflects the achievement of business synergies. More broadly, the relevance of ESI Group’s strategic vision of bringing together the different universes of modelling with areas of physics, from the most simplified (0D-1D dimension systems) to the most sophisticated (3D-4D components) is confirmed.

The integration of Scilab open-source analytical numerical computation software and its internationally recognized programming language used by over one million engineers and scientists for simulation purposes, represents another powerful driver that will widen the appeal of the PPL (Product Performance Lifecycle) approach adopted by ESI Group. By strengthening its position at the early design stages where Scilab finds extensive application, ESI Group continues to pursue its strategy steadfastly and demonstrates its goal of allowing its industrial customers to address the entire life cycle of an industrial product; looking beyond design, manufacture and regulatory certification, to its full service life in operation. 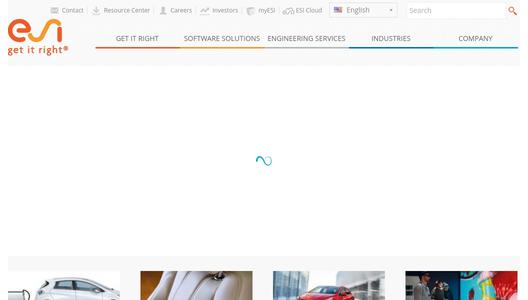 ESI Group is a leading innovator in Virtual Prototyping software and services. Specialist in material physics, ESI has developed a unique proficiency in helping industrial manufacturers replace physical prototypes by virtual prototypes, allowing them to virtually manufacture, assemble, test and pre-certify their future products. Coupled with the latest technologies, Virtual Prototyping is now anchored in the wider concept of the Product Performance Lifecycle, which addresses the operational performance of a product during its entire lifecycle, from launch to disposal. The creation of Hybrid Virtual Twins, leveraging simulation, physics and data analysis, enables manufacturers to deliver smarter and connected products, to predict product performance and to anticipate maintenance needs.