Water- and dust-protected IMUs support CAN and RS-422 interfaces 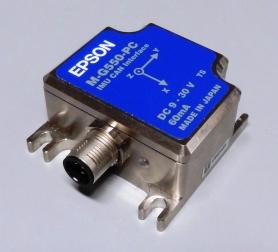 The new 6-DOF [2] IMUs, which have gyroscopic sensors on three axes and accelerometers on three directions, also have built-in support for two widely used industrial interfaces: the CAN [3] protocol in the case of the M-G550-PC and the RS-422 [4] in the case of the M-G550-PR. Packaged in metal enclosures equipped with IP67-level water and dust protection, the IMUs are capable of withstanding harsh, demanding environments. Samples of the products will be available from May 2013. Volume production is slated to begin in July 2013.

Epson's current IMU, the M-G350-PD11 (S4E5A0A0), has earned high marks from customers for its small size, light weight, and outstanding accuracy and stability. The new M-G550-PC and M-G550-PR sacrifice none of this performance while also providing CAN and RS-422 support and strong water and dust protection.

The new IMUs are simple to install and connect in vehicles, marine vessels, and a variety of other industrial products and systems, where they will accurately and easily measure data, control movement, or conduct inspections even under harsh indoor or factory environments.

The M-G550-PR, whose RS-422 interface offers high noise immunity, can also be used to measure motion and perform control or inspection at remote locations (such as on the opposite end of a 200-meter cable).

"Earlier this year, Epson announced the formation of a new sensing systems business with a mission of making high-precision sensors to create new value that improves people's lives," said Yoshiyuki Moriyama, chief operating officer of Epson's Sensing Systems Operations Division. "I believe that these IMUs, which will provide Epson's customers with new value and give their products and services a competitive edge, are a strong first step toward achieving that mission."

For more information about this product: http://www5.epsondevice.com/...

Upcoming trade show
Epson will exhibit and demonstrate its new IMUs at the Epson booth at Sensor + Test 2013, the world's largest international fair for sensors.
Date: May 14-16 2013
Place: Nuremburg, Germany
Booth No. 12-392 (Hall 12)

[1] Inertial Measurement Unit (IMU): A device for sensing inertial motion that consists of angular rate sensors on three axes and accelerometers in three directions. IMUs are primarily used to measure and control the behavior of moving objects.
[2] DOF: Degrees of freedom. The number of directions in which an object can freely move.
[3] CAN: Controller area network, a network protocol used especially to connect automotive and industrial devices.
[4] RS-422: An interface standard for serial communications between devices that allows data to be transmitted over longer distances. Widely used in industrial products.

Epson is a global imaging and innovation leader whose product lineup ranges from inkjet printers and 3LCD projectors to sensors and other microdevices. Dedicated to exceeding the vision of its customers worldwide, Epson delivers customer value based on compact, energy-saving, and high-precision technologies in markets spanning enterprise and the home to commerce and industry. Led by the Japan-based Seiko Epson Corporation, the Epson Group comprises more than 81,000 employees in 97 companies around the world, and is proud of its ongoing contributions to the global environment and the communities in which it operates. http://global.epson.com