Industry and trade could tap into new resources 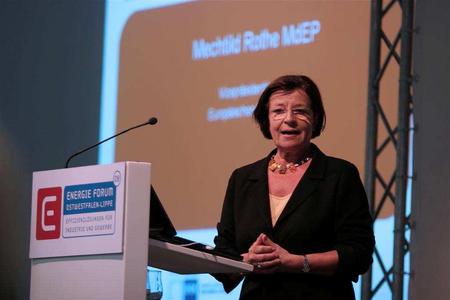 (PresseBox) ( Bad Salzuflen, 08-11-13 )
Rising energy costs and a change in corporate attitude toward the environment mean that new resources are continually coming to the fore: Energy efficiency is gaining more and more weight within industry and trade. That is the main theme behind the 6th Energieforum Ostwestfalen-Lippe, which took the form of a European Convention for the first time this year.

The message to domestic industry from the top quality speakers on the podium was: Energy efficiency results in production cost savings, raises the product's competitiveness and can even lead to the development of new markets. These chances should be seized upon, especially in regard to machine construction; although other areas including the construction industry and tradesmen could also profit from increasing their energy efficiency. Stephan Kohler, president of the German Energy Agency (dena) even called for "internal energy managers" to be trained or appointed.

Political support for these themes comes from Brussels in the form of Mechtild Rothe, vicepresident of the European Parliament and energy expert for the SPD (Social Democratic Party of Germany). She highlighted the fact that the EU is promoting more than just renewable energy and intends to considerably cut CO2 emissions by 2020 by also focusing on the energy consumption of appliances, buildings and production processes, which should be reduced by 20 percent within this timescale. Leading member states have already laid down concrete plans for action in relation to this in 2007.

Patrick Lambert, director of the Executive Agency for Competitiveness and Innovation within Europe, expanded on how these targets can be met. He said that 700 million Euro was available from 2007 until 2013 within the "Intelligent Energy Europe" programme and that this was because: "Europe must become more innovative and competitive". He also drew attention to the successes that are already evident in just the second year of the EU development programme, giving the Austrian firm EPCOS as an example, among others. This firm has invested 135,000 Euro in improving their energy efficiency and as a direct result are now saving 153,000 Euro annually - an amortisation rate of well under a year. Lambert urged the firm to develop their ideas for energy efficiency further and to file their applications for support in 2009 now, although partners from two other EU states would be necessary for this.

Axel Martens, general manager of the IHK Lippe (zu Detmold), was clear: "According to current trends, energy will become more expensive in the future; further highlighting the importance of energy efficiency in the coming years. Our companies here in Ostwestfalen- Lippe - in particular machine construction - are therefore predestined to compete in these international markets." Just next door in the Forum Maschinenbau, Frank Steiniger of Steinbach AG confirmed this evaluation. The Detmold based company produces panels that notably reduce heat loss in processing enclosures. "We are actually a vehicle construction company, but this has opened up a whole new market to us", said Steiniger happily.

But there still seems to be a long way to go. Arnold Drewer, proprietor of the specialist innovative buildings insulation company InnoDämm, based in Paderborn, threw a spanner in the works: "Increasing energy efficiency through thermal insulation is still very underexposed today - that also applies in the case of small and medium sized businesses and tradesmen who have also not really begun to explore this theme. There are truly very few specialists out there."

That is why, according to Klaus Meyer, executive committee member of business network Energie Impuls OWL, energy efficiency investment needs to be directed not only at innovative mechanical solutions but also at the education of the people involved. He campaigned for strengthened knowledge transfer and the building of networks, which is a point on which the Energieforum itself is a good example: The day after the podium presentations saw twelve workshops take place that presented real life practical examples.

The themes on offer ranged from employee expertise and investment strategies through to the international sales and distribution of energy efficient drive technology.

The current financial and business crisis served to put a frown on the foreheads of some of the Energieforum OWL participants. Of course, investment to increase energy efficiency makes sense and is amortised in most cases within a few years, however, these initial investments also need to be financed and that is something that some companies are finding difficult in these times of crisis, despite all the development programmes.

Prof. Dr, Gerhard Berz of the Ludwig-Maximilians-University Munich did not deny this connexion but instead held clearly to the conviction that trade should continue - for climatic, moral and ultimately economic reasons, because not trading would certainly be more costly than to curb the green house effect through energy efficient measures. Fact: If the average temperature rises by just 1.5 °C then we would expe rience the kind of catastrophic weather events that statistically only occur every 75 years, every three years. His Summary: "We are part of a world wide environmental experiment, the like of which human kind has never before experienced - with repercussions of which we can only speculate."

The Energieforum OWL took place for the 5th time this year. It is a joint presentation from the Energie Impuls OWL association, IHK Ostwestfalen (zu Bielefeld) and IHK Lippe (zu Detmold). The convention partners are E.ON Westfalen, Stadtwerke Bielefeld Weser, InnoDämm of Paderborn and the Verein Deutscher Ingenieure (VDI) (Association of German Engineers).

Energie Impuls OWL e.V. is a network of more than 100 companies, institutions and individuals from the OWL area, which have been working together since 2001 to accelerate the development of energy efficiency expertise between the consumer, producer and developer.