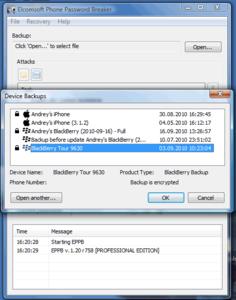 BlackBerry PlayBook is a new player in the increasingly crowded market of consumer-friendly touch-screen tablet PCs. Apple was the first to fill the niche, releasing its first iPad in 2010 and selling more than 14.8 million units in 2010 alone.

Almost a year later, RIM has joined the game and released BlackBerry Playbook. No official statement has been made by RIM on the number of units sold, yet analysts estimate that some 250,000 devices have been sold during the first month alone, estimating the company to ship 450,000 units during its first fiscal quarter ending in May.

On July 21st, 2011, BlackBerry PlayBook has become the first tablet passing the FIPS 140-2 certification from NIST, making it the only tabled certified for US government use. Receiving the appropriate certification means the PlayBook is ready for deployment within U.S. federal government agencies. So far, no other tablet has received a similar certification.

Despite the newly acquired US government certification status, access to information stored in BlackBerry PlayBook devices can still be recovered by using forensic tools such as Elcomsoft Phone Password Breaker.

In its current state, Elcomsoft Phone Password Breaker can recover the original plain-text password protecting the backups produced with all compatible devices (Apple iPhone/iPad/iPod Touch, BlackBerry smartphones and PlayBook devices). The decryption is currently limited to backups produced by all Apple devices and BlackBerry smartphones. The ability to decrypt PlayBook backups is scheduled for the next update. However, if the password to a PlayBook backup is known or has been recovered with Elcomsoft Phone Password Breaker, the backup can be restored to and analyzed on another PlayBook device.

Equipped with brute-force and advanced dictionary attacks with a wide range of permutations and benefiting from ElcomSoft patented GPU acceleration, Elcomsoft Phone Password Breaker can try tens of thousands passwords per second for BlackBerry-created backups.

ElcomSoft plans to add a PlayBook backup decryption module to the next version of Elcomsoft Phone Password Breaker. The company will also be adding PlayBook backup support to its dedicated Blackberry Backup Explorer in near future.

Founded in 1990, ElcomSoft Co. Ltd. develops state-of-the-art computer forensics tools, provides computer forensics training and computer evidence consulting services. Since 1997, ElcomSoft has been providing support to businesses, law enforcement, military, and intelligence agencies. ElcomSoft tools are used by most of the Fortune 500 corporations, multiple branches of the military all over the world, foreign governments, and all major accounting firms. ElcomSoft and its officers are members of the Russian Cryptology Association. ElcomSoft is a Microsoft Gold Certified Partner and an Intel Software Partner.

Bei Wolkesicher ist es möglich, eine gemanagte Nextcloud-Umgebung zu buchen. Die Daten bleiben in deutschen Rechenzentren, was die DSGVO-Konformität sicherstellt. Wir geben einen Überblick. read more
The publisher indicated in each case is solely responsible for the press releases above, the event or job offer displayed, and the image and sound material used (see company info when clicking on image/message title or company info right column). As a rule, the publisher is also the author of the press releases and the attached image, sound and information material.
The use of information published here for personal information and editorial processing is generally free of charge. Please clarify any copyright issues with the stated publisher before further use. In the event of publication, please send a specimen copy to service@pressebox.de.