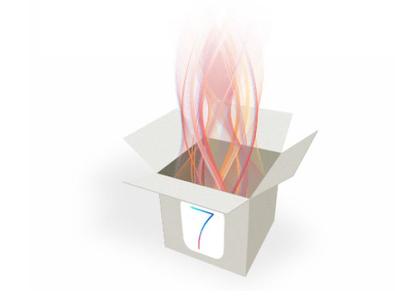 "Adoption of the newest and latest has always been strong with Apple users", says Vladimir Katalov, ElcomSoft CEO. "The new iOS is a major upgrade offering a lot of controversial bells and whistles, but also implementing stronger security and improved usability. The more powerful smartphones become, the more information the users will store in them, and the more information we can extract out of their devices with our software."

By the end of August, 2013, some 13% of all mobile devices (smartphones and tablets) sold worldwide were running Apple iOS. These devices contain tremendous amounts of highly sensitive information about their users.

Adoption of the newest versions of iOS among Apple has been traditionally strong. According to Apple, the previous version of iOS (iOS 6) was adopted by 93% of all customers. Similar numbers are expected for iOS 7. Early adoption rate of the newly released iOS 7 is extremely high. More than 35% of all Apple users have already updated their devices to iOS 7 by the end of the first day since the new system was publicly released.

By adding support for the latest version of Apple iOS, ElcomSoft delivers a tool enabling investigators to capture, decrypt and analyze information stored in all current and legacy Apple devices.

An important addition in this latest release of Phone Password Breaker is the ability to decrypt the content of Apple's protected storage, the keychain. With every new iOS release, Apple moves more items into the keychain. Highly sensitive information stored in the keychain includes passwords to email accounts, account credential, filled forms and passwords to Web sites, stored credit card data and many bits of other information that may be critical for an investigation.

Note: keychain data can only be recovered from iTunes backups that are password-protected. The keychain in iTunes backups with no password is protected with a hardware-specific key, and cannot be decrypted.

The last release of Elcomsoft Phone Password Breaker implemented the ability to speed up the downloading of user data from iCloud accounts by enabling investigators to select what types of data should be downloaded. This new release further enhances this ability, adding multiple new types of data to the list of selectable categories. In addition to previously available items such as general device information, phone settings, messages, call logs and camera roll, investigators can now opt to download data on communications over social networks (Facebook, Twitter, LinkedIn, Foursquare, WhatsApp, Instagram, Skype), data from Google apps, emails and addresses, user dictionaries, Passbook, voice mail and data from Apple maps and planned routes.

Founded in 1990, ElcomSoft Co. Ltd. develops state-of-the-art computer forensics tools, provides computer forensics training and computer evidence consulting services. Since 1997, ElcomSoft has been providing support to businesses, law enforcement, military, and intelligence agencies. ElcomSoft tools are used by most of the Fortune 500 corporations, multiple branches of the military all over the world, foreign governments, and all major accounting firms. ElcomSoft and its officers are members of the Russian Cryptology Association. ElcomSoft is a Microsoft Certified Partner and an Intel Software Partner.

Nutanix hat ein „Elevate Service Provider Program“ gestartet, das auf dem bestehenden Elevate-Partnerprogramm aufsetzt. Damit können Service Provider inklusive Managed- und Cloud-Service-Spezialisten Hybrid- und Multi-Cloud-Services aufsetzen. read more
The publisher indicated in each case is solely responsible for the press releases above, the event or job offer displayed, and the image and sound material used (see company info when clicking on image/message title or company info right column). As a rule, the publisher is also the author of the press releases and the attached image, sound and information material.
The use of information published here for personal information and editorial processing is generally free of charge. Please clarify any copyright issues with the stated publisher before further use. In the event of publication, please send a specimen copy to service@pressebox.de.