Lykan is "Fast and Smart" with ekin Patrol 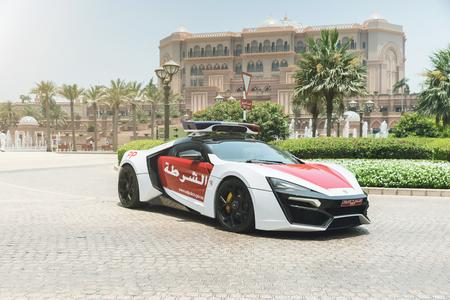 After its debut in January, Lykan was rated with a sales price of 3.5 million USD and only 7 pieces were manufactured, where its fame grew after its appearance in the film "Fast and Furious". Having used ekin Patrol system, featuring the world's first smart patrol manufactured by ekin Technology, in their police cars and impressed by its performance, Abu Dhabi Police Department brought this smart system together with Lykan.

The "Robocop" Era Starts for the Policemen

Lykan, manufactured by W motors, reaches 100 km (62 mph) in only 2.7 sec. Lykan Hybersport is recognized as one of the fastest and fanciest cars produced worldwide. Possessing diamond parts in its LED lighting system and its leather inner coating stitched with golden thread, the car's dashboard is designed as interactive and holographic in three dimensions. Lykan, one of the world's fastest cars and equipped with ekin Patrol, thus becomes the smartest car in the world and is transformed into a "Robocop". ekin Patrol is capable of reading the license plates and speeds of moving and stopping cars and recognizing faces even when the vehicle is under way with maximum speed. It can also store all license plates, speeds and faces. Science fiction films come true with the help of ekin Patrol, which is designed for the policemen of the future.

Having integrated Lykan Hybersport equipped with ekin Patrol into their ranks, the Abu Dhabi Police Department won't give any respite to criminals with this state of the art technology. Soon to be presented to visitors in a shopping mall in Abu Dhabi, Lykan equipped with ekin Patrol, will be the focus of interest with its "smart" system along with its esthetical design and speed. Developed after two years of rigorous research by the company's research and development team, in collaboration with police forces and road safety specialists, ekin Patrol is "the first truly intelligent patrol unit in the world" and is truly a game changer.

About ekin Patrol: The 'ekin Patrol' system is operable in park position or on the move and is capable of automatically reading and querying all license plates in its field of view as well as identification and recording of driving speeds to generate violations simultaneously. Vehicles equipped with ekin Patrol are able to communicate with each other and captured live images can be monitored with the help of a single centre. The system allows tracking via map, where features such as face recognition and air pollution sensors are optional.

ekin Patrol, specifically designed for use by police forces and responders worldwide, offers the users a multitude of capabilites and benefits:

The Company offers a wide range of open platform software and hardware integrated end-to-end solutions that are fully designed, manufactured, marketed and maintained of its own as well as consulting services. Thanks to its in-house R&D team, ekin Technology is well positioned to provide various city and traffic intelligence, surveillance and security needs to businesses and cities around the world.

With headquarters in Istanbul, ekin Technology has a worldwide presence with a concentration on the Middle East, North Africa, Russia, CIS, Europe and North America regions.