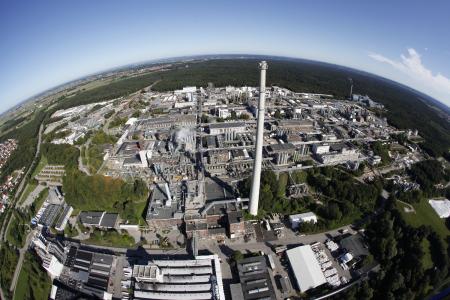 (PresseBox) ( Neuss, 16-08-01 )
From the oven in the kitchen to the moon and from the football stadium to the car - when Dyneon GmbH in Burgkirchen celebrates the 20th anniversary of its founding on 1st of August 2016 it can look back on a successful history. The fluoropolymers manufactured in the Chemical Park Gendorf have spread around the globe. The materials are used for astronauts' space suits, frying pans, roof films, seals and much more.

In Burgkirchen as well as in more than 50 countries worldwide, around 550 employees take care of production, sales and constant further development at Dyneon GmbH. The company produces about 17,000 tonnes of fluoropolymers per year. Turnover is around 250 million euros.

The company was founded on 1 August 1996 and is today a 100 percent subsidiary of the multi-technology company 3M. The manufacture of fluoropolymers had already begun back in 1965, at that time under the management of Hoechst AG, later as a joint venture.

"When we make a toast to 20 years of Dyneon GmbH at our small company celebration on the 1st of August, we will also be looking back to 50 years of fluoropolymer production. We are proud to have created one of the world's largest production facilities for fluoroelastomers, fluorothermoplastics, PTFE and specialty additives here in Burgkirchen and we thank our customers and employees for their trust and dedication", says Burkhard Anders, managing director of Dyneon GmbH on the occasion of the anniversary.

Universal use thanks to excellent properties

The high-performance material produced by Dyneon is extremely resistant and universally usable. Its resistance to chemicals, electrical insulating capability, elasticity and resistance to temperature make it attractive for many industries and applications. In daily use, we encounter the material as a non-stick coating for frying pans or baking trays. It is also used in cars, aircrafts, architectural buildings or industrial plants.

"For us, 20 years of successful company history also mean a certain responsibility for the future. Continuous investment in research and development is only natural for 3M and Dyneon", Anders explains. That is why a pilot plant for the world's first fluoropolymer Up-Cycling process was put into operation a year ago. Now, fully fluorinated polymer waste from the industry no longer needs to be disposed of at the refuse tip, but can be recovered as a fully fledged new material.

Further innovations for environmental protection in the past years have been, for example, the use of the emulsifier ammonium perfluorooctanoate (APFO) for the entire range of plastic products as well as the development of a special plastic for the internal lining of tank pipes that is permanently resistant to bio diesel at high temperatures.

3M is a science-based company with a culture of creative collaboration that inspires powerful technologies, making life better. With $32 billion in sales, 3M employs 90,000 people worldwide and has operations in more than 70 countries. For more information, visit www.3M.com or follow @3MNewsroom on Twitter

Dyneon GmbH, a 3M Company and part of the Advanced Materials Division, is a major supplier of fluoropolymers and is focusing on development, production and sales at its headquarters in Burgkirchen, Germany. The product portfolio of fluoroelastomers, fluorothermoplastics, Polytetrafluoroethylene (PTFE) and plastic additives, is available through the 3M sales organisation or representations in more than 50 countries. For more information please visit www.dyneon.eu

3M and Dyneon are trademarks of the 3M Company.