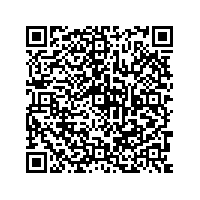 Lightweight solution as noise barrier and privacy shield for residents

Tunnel in the air made of ETFE film cushions 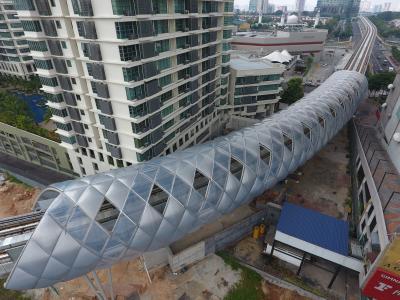 (PresseBox) ( Neuss, 17-05-10 )
Every few minutes the driverless Kelana Jaya LRT elevated railway squeezes its way through the sea of houses in the conurbation of Kuala Lumpur, the capital city of Malaysia. At the narrowest point the track runs less than three metres away from a residential building and a hotel. To protect the residents from the high noise stress, Malaysia's first "tunnel in the air" has been built. It encloses a curved section of the track with 363 film cushions, which are made from the high-performance 3M Dyneon Fluoroplastic ETFE.

Economic success in Asia has also inflated its traffic problems to new dimensions. The solution of choice is the development of local public transport. That is also the case in the Kuala Lumpur conurbation in Malaysia, whose seven million inhabitants make it one of the most densely populated regions on the peninsula. In recent years, the route network of the Kelana Jaya Light Rail Train elevated railway has been expanded to almost 50 kilometres. The construction of the elevated railway relieves the traffic at ground level in the same way as underground railways, but is considerably less expensive to build.

At the narrowest point of the most recent development stage, the distances between the track and the nearest house and hotel are less than three metres. That leads not only to enormous noise stress for the residents. The train passengers also had a direct view into the homes and hotel rooms. Therefore, "Prasarana Rail and Infrastructure Projects", who operates the line, decided to equip the narrow point with noise protection elements and to erect a "tunnel in the air" as a privacy shield.

Architen Landrell of Chepstow in the UK, one of the leading companies for the use of membranes and films in architecture, was responsible for the implementation. The company has already installed more than 6,000 lightweight constructions in 48 countries. The challenge in Malaysia was the curved route of the track and the tight space between the buildings. Architen Landrell constructed the air tunnel from 363 steel frames, each one holding a pneumatically inflated cushion made of ETFE film. The tunnel has a complex three-dimensional form. None of the 363 film cushions are identical. The company developed special software to master this complexity.

The films for the roughly 2,500 square metre of cushion surface were extruded by Nowofol Kunststoffprodukte GmbH & Co. KG from the high-performance material 3M Dyneon ETFE. The company produces the NOWOFLON® ET 6235Z films in thicknesses between 80 and 400 microns, both transparent and in virtually all RAL colours, as well as in an infrared-absorbing version. Architen Landrell installed transparent and silver-coloured films in the tunnel. Moreover, several empty frames allow for pressure compensation when trains pass through.

3M Dyneon ETFE is virtually universally resistant to chemicals, including aggressive exhaust gas emissions, and is regarded as non-flammable. The high-performance material conforms to the necessary European and US standards for installation in sports stadia. Architen Landrell produced further proofs of fire safety for the Malaysian authorities – an important property in the direct vicinity of residential buildings.

The construction of the tunnel took place in summer 2016 without interruption of the railway operations. The individual frames were connected to the existing elevated track construction. That was only possible with a very lightweight structure. The films weigh less than five percent in comparison to a glass construction. Thus, the support structure can be made lighter and slenderer.

ETFE film cushions have been proving themselves for over thirty years in every climate zone in the world. Their surface is so smooth that a rain shower is sufficient to clean them for the most part. That reduces the operational costs. For the film extrusion from 3M Dyneon ETFE Nowofol Kunststoffprodukte does not need any plasticizer or additives that could migrate and result in cracks or embrittlement nor does it provide breeding ground for algae and mould even after decades of use in hot and humid climate zones.