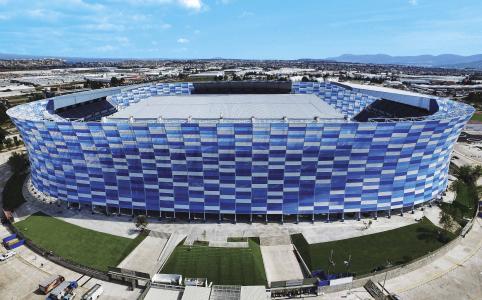 (PresseBox) ( Neuss, 18-04-09 )
The world’s largest façade made of single layer ETFE film is gleaming in the club colors of the Mexican first division club, FC Puebla. The freshly renovated traditional stadium Cuauhtémoc in the Mexican highlands rises to a height of around 40 meters. The extravagant façade made of more than 30,000 square meters of film was built in a very sophisticated design. The film was extruded from the high-performance material 3M Dyneon Fluoroplastic ETFE. The lightweight film makes it possible to build the stadium with 1,500 tons of steel less than for a comparable glass façade.

Cuauhtémoc was the last ruler of the Aztecs, who was forced to surrender to the Spanish conquistadors. Although today he is considered a national hero in Mexico, the Estadio Cuauhtémoc in the metropolis of Heroica Puebla de Zaragoza in the Mexican highlands, around 130 kilometres south of Mexico City, is not named after him. The sports complex, built in 1967, had already hosted suspense-packed competitions at the Summer Olympic Games in 1968 as well as being the venue for the FIFA World Cup in 1970 and 1986. The stadium was completely modernized in the years 2014/2015 and furnished with the first ETFE façade in Mexico by Dünn Lightweight Architecture.

As the sixth largest stadium in Mexico, it now seats 51,700. The façade seems extremely lightweight in its curved shaped and incorporates pre-Columbian design elements with its mosaic character. It consists of 124 vertical segments, about 40 meters in height. A total of 5,952 ETFE film sections in the three shades were welded to one another for the segments. In the daytime the club colors of blue and white as well as the transparent sections continue to be visible. By night the film sections are illuminated by in various colors by LED lights.

ETFE resists nearly all chemicals
Especially important in the hot and humid climate: In the production of films made of 3M Dyneon ETFE no plasticizers are required, which evaporate over time and thus could promote algae or fungal growth. ETFE films are so smooth that rain showers are sufficient to clean the façade to the greatest possible extent. They are so resistant to other chemicals that they are also able to withstand environmental influences such as exhaust emissions for decades.

Originally, parts of the façade of the stadium in Puebla were made of glass panels in various colors. Dünn Lightweight Architecture chose to design the complete façade with ETFE film instead. One significant advantage: The weight per unit area of ETFE is around 95 percent lower than that of glass. As a result, stress analysts were able to build the support structure in a much lighter way. Instead of the 2,500 tons of steel required for a glass construction, 1,000 tons are sufficient for the ETFE façade, a savings of 60 percent.

Extrusion in any colour you want
Nowofol Kunststoffprodukte GmbH & Co. KG extruded the films from high-performance material 3M Dyneon ETFE. The company manufactured the NOWOFLON ET 6235Z film for the project in Mexico in three shades and with a thickness of 200 micrometers. The 160 cm wide films were welded in such a way that a mosaic with 80-centimetre-high fields results in the panels up to six meters wide. Nowofol produces ETFE films in nearly all RAL shades and in an infrared absorbing design, in order to minimize the solar heat gain. The films comply with fire classification B1 (in accordance with DIN 4102), an important criterion for stadiums.

Shortly after the remodelling, the naming rights for the stadium were sold to the financial group Multiva for 30 years. There is a very simple reason why there was no public outcry: It was not the last Aztec ruler Cuauhtémoc that the stadium was named after, but rather a brewery that financed the majority of the original construction 50 years earlier. In 2011 this brewery was bought up by an international group.

About 3M
At 3M, we apply science in collaborative ways to improve lives daily. With over $32 billion in sales, our 90,000 employees connect with customers all around the world. Learn more about 3M’s creative solutions to the world’s problems at www.3M.com or follow us on Twitter @3MDeutschland.

Dyneon GmbH, a 3M Company and part of the Advanced Materials Division, is a major supplier of fluoropolymers and is focusing on development, production and sales at its headquarters in Burgkirchen, Germany. The product portfolio of fluoroelastomers, fluorothermoplastics, Polytetrafluoroethylene (PTFE) and plastic additives, is available through the 3M sales organisation or representations in more than 50 countries. For more information please visit www.dyneon.eu

3M and Dyneon are trademarks of the 3M Company.