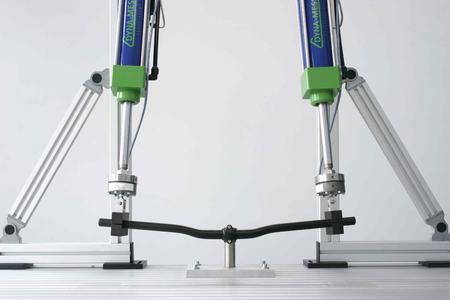 (PresseBox) ( Stolberg, 09-09-18 )
At Composites Europe in Stuttgart, Germany, DYNA-MESS will present a new software programme for multi-axis, dynamic testing of composites. The new software combines phase control of exceptional accuracy with high ease of use.

At the trade fair, DYNA-MESS will demonstrate the new DYNA-TCC (Test Control Center) software in a testing set-up with several servo-pneumatically actuated axes for dynamic tests of carbon fibre handlebars for bicycles.

Components subjected to complex loads and made of composite materials must be tested under realistic conditions. Handlebars of bicycles, for example, must withstand heavy, low-frequency loads during acceleration from rest and high-frequency loads on bumpy tracks. By no means must they break under extreme loads as, for example, during downhill runs or jumps. DYNA-MESS systems are ideally suited to realize such varying load situations.

The new software has been specially designed as a highly versatile tool enabling the user to realize individual solutions in a swift and easy manner. This translates into a major cost advantage when it comes to implementing new testing tasks. The self-learning automatic controller "DYNA-AC" makes any optimization of the testing machine's control parameters superfluous. The controller needs but a few cycles to adapt the as-is to the nominal curve.

Considering that the investment costs for the hardware components of servopneumatically actuated systems are substantially lower than those of hydraulic systems, the cost advantage of a solution based on servopneumatics becomes especially obvious in the case of multi-axis testing systems.

When performing tests of components, such as chassis or interior car parts or artificial hip joints, the new software controls up to 6 axes, which can be controlled either independently of each other or relative to one another. In the latter case the relative movement can be objectively set by the operator. The programme is based on the DYNA-TCC software, a proprietary development by DYNA-MESS capable of highly accurately adjusting the relative movements of the individual axes. This feature achieves utmost testing accuracy.

In line with the DYNA-MESS philosophy, the software is intuitive and easy to use. This is achieved, among others, by relieving the user from any superfluous and unnecessary functions.

The new software can be used with all servopneumatic testing machines supplied by DYNA-MESS and other manufacturers. For existing systems, an update is available. This is a highly economic option for bringing systems, whose mechanics are still "in good shape", to the latest state of the art.

DYNA-MESS Prüfsysteme GmbH was established in 1985 in Aachen, Germany, by Dr.-Ing. Albert Mülln. The company designs and manufactures machines for static and dynamic testing of materials and parts.

DYNA-MESS offers a wide range of machines for tensile, pressure, bending, torsion and vibration tests. The systems are used, for example, in the automotive industry for testing seats, steering wheels or pedals, in medical technology for inspecting dental implants and protheses and in structural engineering for analyzing structural behaviour. DYNA-MESS specializes in customized machines which distinguish themselves by their highly user-friendly software. The company combines outstanding strengths such as flexibility, competence and individual customer care, just to mention a few.