With the support of DVS, Messe Essen, Messe Düsseldorf and Al Fajer are setting up a new trade fair in the Middle East 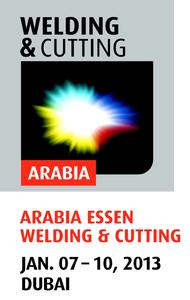 (PresseBox) ( Düsseldorf, 12-01-04 )
ARABIA ESSEN WELDING & CUTTING - International Trade Fair Joining, Cutting, Surfacing − which will be held for the first time in Dubai from 7 to 10 January 2013, is a cooperation between three trade fair organisers, Messe Essen, Messe Düsseldorf and the local organiser, Al Fajer. The event will be supported by the industry expertise of DVS, the German Welding Association, as industry partner.

The United Arab Emirates (UAE) are considered to be the most important trade hub between Europe and Asia. Together with Saudi Arabia, this federation of seven emirates in the Persian Gulf is therefore a highly attractive market for international companies and investors in the Arabic world. The UAE are among the most developed national economies in the Middle East, have the seventh biggest oil reserves in the world as well large gas reserves and are among the richest countries worldwide. In addition to their oil business, the UAE primarily live on tourism, trade and the service sector as major elements of their industries. Growth can be observed above all in the energy sector and in the capital-intensive sectors, high technology and tourism.

Dubai is the biggest city in the UAE and one of the two financially strongest cities among the seven emirates. It has developed into an important sales market and a favourable production base with a considerable demand for international welding technology, as Dubai is planning several large-scale construction projects and investments in its infrastructure.

By bundling their expertise, the three organisers are now aiming to establish this industry as a major dimension in the Middle East. Messe Essen has long been a partner of DVS in the planning and implementation of trade fairs on welding and cutting, in Germany and abroad. DVS contributes its expertise to these trade fairs, both in the general planning and in the realisation of the events. Messe Essen, Messe Düsseldorf and DVS can already look back to a long-standing and successful partnership in Russia and India. Further overseas welding shows are BEIJING ESSEN WELDING & CUTTING and BRAZIL WELDING SHOW. Beyond that, for the last six years, Messe Düsseldorf has been working with the local organiser, Al Fajer, on Tekno/Tube Arabia, a trade fair for industrial machinery, metal treatment and tools and machines for the tube industry.

In 2013 this trade fair will be held simultaneously with ARABIA ESSEN WELDING & CUTTING at the Dubai International Convention and Exhibition Centre. ARABIA WELDING & CUTTING will ideally complement Tekno/Tube Arabia with its focus on welding, cutting and laminating.

The timing and the circumstances of the premiere of ARABIA ESSEN WELDING & CUTTING could hardly be more ideal.