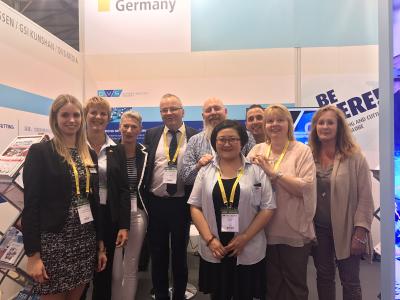 (PresseBox) ( Düsseldorf/Shanghai, 17-07-21 )
The organisers were proudly able to say "Happy Birthday" on the occasion of the 22nd BEIJING ESSEN WELDING & CUTTING in Shanghai/China from June 27 to 30. Because the successful trade fair which was originally called just BEIJING ESSEN WELDING celebrated its 30th anniversary with around 1,000 exhibitors from 30 countries. That was one reason for delight for the German Welding Society (DVS) which acts as the ideal sponsor of the fair and for Messe Essen GmbH which, as accustomed, appeared as the organiser. In situ, there was support from the Chinese Mechanical Engineering Society (CMES) which invited guests to an international celebration on the occasion of the anniversary.

The partner companies and the cooperation partners, including not only DVS and Messe Essen but also GSI - Gesellschaft für Schweißtechnik International mbH and the American Welding Society (AWS), were invited to this celebration. CMES expressed its gratitude for the good cooperation and announced that, next year, BEWC will be staged in the City of Dongguan for the first time instead of in Peking.

Suitably for the 30th anniversary, the German Pavilion also shone forth in a new look. In this respect, attention focused on a modern, open and friendly appearance. Using pictorial motifs on steles which were selected to be suitable for the subject of "Joining, Cutting, Surfacing", the German Pavilion seemed to be more present and more inviting for the trade visitors. DVS was also involved in the implementation of the new design. This illustrated the society's strong connection with the most successful foreign fair from the SCHWEISSEN & SCHNEIDEN family.

During a tour of the German Pavilion, the Deputy Consul General, Jörn Beißert, obtained information about the redesigning and, of course, about the product innovations too. He was pleased about the annually growing participation of German entrepreneurs in China and took a lot of time for discussions with the German exhibitors. At the traditionally held, well-visited embassy reception, everybody had the opportunity to intensify these discussions.

The next BEIJING ESSEN WELDING & CUTTING is scheduled for May 8 to 11, 2018 in Dongguan.