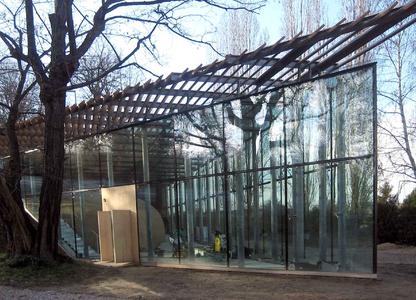 (PresseBox) ( Bad Homburg, 08-07-10 )
The use of DuPont™ SentryGlas® Plus structural interlayer in laminated SGG Stadip safety glass from Saint-Gobain Glass has helped lighten the structure of the Chapelle des Diaconesses. This religious building opens itself up to the environment through the subtle interplay of glass and wood.

A new setting has been created for the most important services of the Protestant parish of the Diaconesses. The sisters wanted to place the chapel project firmly in the 21st century and “offer modern people an interior that combines beauty, intimacy and celebration, inviting them to reflect and find peace.”

To replace the tent structure that previously served as a chapel and showed considerable wear after being in use for 20 years, French architect Marc Rolinet came up with a lightweight structure consisting of two units in wood and glass. It follows the uneven topography of the site and creates access at two levels. An upturned wooden shell forms the oblong contemporary chapel, built of superimposed pine strips that were individually steam-curved on site. This organically shaped chapel curls up inside a voluminous glass structure with a triangular base that is protected from hot sunlight by a horizontal roof, also made of wooden strips. The walking space between the chapel and its transparent envelope is meant to invite meditation and offer a direct link with the surrounding park dotted with tall trees. This bioclimatic envelope filters and exploits the natural daylight entering through 360 degrees.

The transparency and ethereal character of the building were enabled by using the DuPont™ SentryGlas® Plus structural interlayer in the laminated safety glass for the two façades and the roof. “I soon realised how useful this material would be and insisted on using it right from the start,” explains Marc Rolinet. The work was performed well in advance to derive maximum benefit from the mechanical properties of this structural interlayer. “The structural calculations, performed by DuPont in cooperation with the Austrian branch of Saint-Gobain Glass, enabled us to reduce the glass thickness, increase the pitch and lighten the supporting structure.”

In this project, DuPont certainly demonstrated the benefits of SentryGlas® Plus over the conventionally used material, polyvinyl butyral (PVB). The SentryGlas® Plus structural interlayer offers three times less deflection than laminated PVB safety glass and induces half the inherent stress within the glass layers at the same glass thickness (glass and interlayer). “Only the deflection resistance of SentryGlas® Plus made it possible to realise such long trapezoidal panels on the roof (2.2 metres in length),” says Bjorn Sanden from the Glass Laminating Solutions division of Du Pont de Nemours France.

This choice also had a positive effect on the overall construction costs because, to offer the same mechanical strength, glazing of the same size and without the DuPont™ SentryGlas® Plus structural interlayer, would have had to be thicker. That would have meant additional costs both for the glazing and the structural elements, since they would have had to bear a correspondingly higher load. The architectural benefit is also apparent, because this solution enables optimum glazing sizes without any influence on the supporting structure.

The horizontal roof panels were made of insulating glass units composed as follows: the outer layer is made of 10mm thick tempered coated safety glass, which provides enhanced heat insulation by acting as a heat shield. Inside is a laminated safety glass made out of a 12mm tempered laminate, a 1.52mm SentryGlas® Plus structural interlayer and 8mm tempered glass. The outer and inner layers are separated by a 12mm air gap. The insulating glass in the façades has a laminated safety glass outer layer with two 8mm tempered glass panels separated by the 1.52mm SentryGlas® Plus structural interlayer. The inner layer consists of 10mm tempered safety glass. Both layers are separated by a 16mm air gap.
The fixing devices were integrated directly into the laminated inner glass layer of the vertical panels. This attractive fixing system was made possible by the interlayer, which adds strength and provides more reliable framing for this large-scale application.

Apart from this inherent strength, the interlayers offer better edge stability and excellent optical properties. The open-edged sheets are insensitive to edge discoloration and delamination. Moreover, SentryGlas® Plus enhances the safety and strength of the entire assembly. Thanks to its post-breakage strength, which is higher than that of PVB, the interlayer holds the glass sheets in place even if they are shattered.

Another benefit in terms of optical appearance and maintenance of the chapel's horizontal surfaces is that the SentryGlas® Plus interlayer greatly reduces deflection of the laminated glass through its low creep properties. This is especially true when the glass is exposed to high temperatures linked to solar radiation. Since the roof has no curved surfaces, the low deflection also prevents the formation of dirt deposits caused by rain.

The architect also speaks highly of the material’s optical effects. "This material is much more attractive than conventional laminated glass. The planarity of the glass combined with DuPont™ SentryGlas® Plus gives the façades a mirror-like effect.” The transparency is durably maintained, as shown by many architectural applications for DuPont™ SentryGlas® Plus since the mid-1990s.


The DuPont Oval, DuPont™, The miracles of science™, and SentryGlas® are registered trademarks or trademarks of E.I. du Pont de Nemours and Company or its affiliates.

DuPont is a science-based products and services company. Founded in 1802, DuPont puts science to work by creating sustainable solutions essential to a better, safer, healthier life for people everywhere. Operating in more than 70 countries, DuPont offers a wide range of innovative products and services for markets including agriculture and food; building and construction; communications; and transportation.