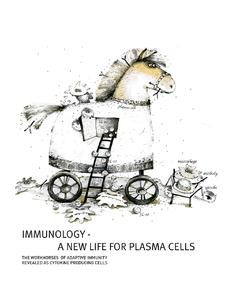 (PresseBox) ( Berlin, 14-03-20 )
Cells of the B cell lineage have been primarily known for their unique capacity to differentiate into antibody-secreting plasma cells. Antibodies are major mediators of humoral immunity; they can bind microbes and deliver them to immune cell types with potent antimicrobial activities. Besides this protective role, B cells can also express antibodies reacting against the body's own structures, and subsequently act as drivers of pathogenesis in autoimmune diseases such as rheumatoid arthritis.

Are B cells solely pathogenic cells in autoimmune diseases? A team of scientists at the Deutsches Rheuma-Forschungszentrum Berlin (DRFZ), a Leibniz Institute, has now revealed that B cells play a more complex role in immunity. In a recent study (funded by DFG, Hertie Foundation and Institut Mérieux) published in the scientific journal Nature (published online Feb 23, 2014), Ping Shen and Toralf Roch from the team of Dr. Simon Fillatreau could, together with their collaborators, demonstrate a novel role for B cells as regulators of immunity via the secretion of the molecule IL-35. By demonstrating that plasma cells were the main source of this cytokine, they challenge the established paradigm that plasma cells only mediate antigen-specific function through the production of antibodies.

Plasma cells, which are fully differentiated B cells, are the only cells capable of secreting antibodies. For this reason, they have traditionally been considered as professional antibody factories, and due to their extreme specialization, it had been assumed that they were devoid of any other immune function. The antibodies produced by a given plasma cell are highly specific and directed against one single antigen, thus typically protecting against one type of pathogen.

Besides differentiating into antibody-secreting plasma cells, it has been known that B cells can also have antibody-independent functions. Already in 2002, Dr. Fillatreau could demonstrate for the first time that B cells play a central role in the suppression of autoimmunity by secreting the cytokine IL-10. This work pioneered the concept of so-called "regulatory B cells", that alike regulatory T cells, could dampen unwanted immune reactions and protect the host from immune-mediated pathology. The new work from the DRFZ team, performed in close collaboration with Prof. Dr. Stefan H. Kaufmann (Max Planck Institute for Infection Biology, Berlin, Germany) and Prof. Stephen M. Anderton (University of Edinburgh, U.K.), further extends the parallel between regulatory T cells and so-called "regulatory B cells". They could now show that B cells also represent a crucial source for IL-35, which was known to be essential for the suppressive activity of regulatory T cells. Mice lacking expression of IL-35 by B cells developed a markedly aggravated disease in experimental autoimmune encephalomyelitis (EAE), the primary animal model for multiple sclerosis, in comparison to mice in which B cells could produce this cytokine. Dr. Fillatreau and his colleagues then took one big step forward by searching for these B cells which are the producers of IL-35. To their surprise these cells were newly generated plasma cells that locally accumulate at the site of inflammation, observed during infection as well as in the EAE autoimmune disease model. They also showed that plasma cells were the major source of IL-10 during these diseases, evoking the existence of subsets of plasma cells with regulatory functions. The discovery of the capability of some plasma cells to regulate immune reactions by secreting the anti-inflammatory cytokines IL-35 and IL-10 breaks the paradigm that plasma cells only mediate antigen-specific function by secreting antibodies. Moreover, these findings reveal the existence of distinct subsets of plasma cells that can be identified by their production of cytokines. "This unexpected pathway of suppression and the antibody-independent functions of plasma cells could be of general importance in a broad range of diseases", says Simon Fillatreau. The results therefore open new avenues of research on the biology of plasma cells and their functional heterogeneity.

The German Rheumatism Research Centre (DRFZ) Berlin, a Leibniz Instiute, investigates rheumatic diseases in an interdisciplinary manner. 25 research groups study immunology, experimental rheumatology and epidemiology of rheumatic diseases. A hallmark of the DRFZ is the close connection to the Charité - Universitätsmedizin Berlin. A benefit for both physicians and scientists: this unique setting enables the development of experimental research to meet the clinical challenges and the application of modern technologies and methods in the clinic.

The German Rheumatism Research Centre (DRFZ) Berlin, a Leibniz Instiute, investigates rheumatic diseases in an interdisciplinary manner. 25 research groups study immunology, experimental rheumatology and epidemiology of rheumatic diseases. A hallmark of the DRFZ is the close connection to the Charité - Universitätsmedizin Berlin. A benefit for both physicians and scientists: this unique setting enables the development of experimental research to meet the clinical challenges and the application of modern technologies and methods in the clinic.