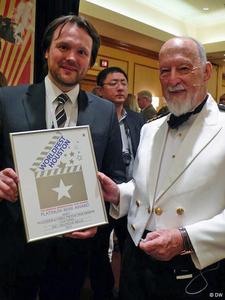 (PresseBox) ( Bonn, 13-05-17 )
At the WorldMediaFestival in Hamburg, Deutsche Welle journalists and producers have received three gold and five silver awards in a wide range of programming areas.

The WorldMediaFestival, hosted by intermedia, is a global competition for modern media, including film, TV, print and web. An international jury selected the winners among more than 600 entries from over 36 countries.

The DW documentary "Schumann at Pier2," directed by Christian Berger, won the intermedia-globe GOLD in the category "Documentaries Arts." This concert film, shot at a former dockyard building, offers an unconventional take on Robert Schumann's four symphonies, conducted by Estonian-American conductor Paavo Järvi and performed by the members of Deutsche Kammerphilharmonie Bremen.

Two GOLD awards went to the TV magazine "SHIFT - Living in the Digital Age" and the interactive web documentary "Namati's World - The Dreams and Fears of a Young Coral in the South Pacific" in the categories "Documentaries: Magazine Formats" and "Education and E-learning" respectively. "SHIFT" (idea/concept: Rolf Rische, executive producer: Nadja Scholz) is a weekly magazine that showcases the latest Internet news in an informative and entertaining way. As part of DW's "Global Ideas" series, "Namati's World" (reporter: Joachim Eggers, camera: Axel Warnstedt) is targeted at a young audience and offers spectacular underwater video footage and great suspense.

In the category "Documentaries: Environment-Conservation-Recycling, "the intermedia-globe SILVER was awarded to the DW documentary series "Ecopia - Intelligent Building, Sustainable Living," which presents visionary architecture around the globe. DW's other four SILVER award winners are:

- The documentary "The Silent Demise of a Species" in the category "Documentaries: Nature and Wildlife." It deals with the massive death of frogs in a rain forest in Cameroon;

The World Media Festival was not the only recent event where DW productions were recognized. At this year's WorldFest - Houston International Film Festival in the US, Deutsche Welle collected a total of six prizes. Platinum in the "Cultural" category went to Shift, while Schumann at Pier2 and Ecopia received the gold awards in the "Documentary" and "TV Series - Documentary" categories, respectively. The series "The Strange World of max x." was a three-time winner in the "Entertainment" category with one platinum, one gold and one silver trophy for three of its episodes.