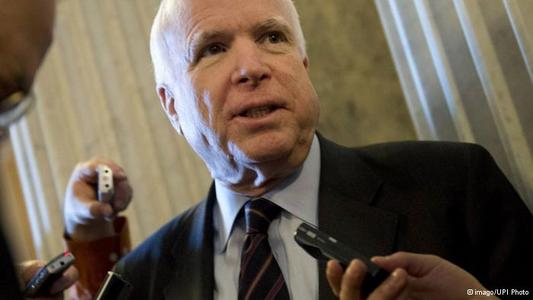 (PresseBox) ( Bonn, 13-12-11 )
John McCain is considered one of the most outspoken US senators. The former presidential candidate describes the conflict in Ukraine as "very dangerous," and tells DW about the importance of NSA oversight.

DW: Let's look at Ukraine first. Many people there want a European future and are demonstrating against President Yanukovych's decision to pull out of the Association Agreement with the EU. How dangerous do you think this conflict is?

John McCain: I think the conflict is very dangerous, and we will know in the next few days. Ukraine is a big, important country. Putin's behavior is really an attempt to realize the old "near abroad," whether it be Ukraine, Lithuania, Latvia, Estonia, Belarus, Moldova, all the surrounding countries. It's pretty obvious that the people of Ukraine want to be associated with Europe, and not with this phony customs union of Vladimir Putin. And he is putting enormous pressure on the Ukrainian government, and the people are not going to accept that. It seems to me that what the existing government should do is to say. "We will move in a path towards the European Union, that's the will of the people."

Should the Europeans, Germany, and the Obama administration increase their pressure on the government in Kyiv?

I think the only thing that we can do, and the German government, and our friends in the European Union, is urge restraint on the part of the Ukrainian government and president. But there isn't much that we can do in the way of increased pressure. Because then you risk a backlash - we can have no doubt about the pressure that Putin is putting on the Ukrainians to join his so-called custom union. But it brings up a larger issue, and that is Putin's behavior, whether it be repression of the Russian people and also the pressures he's putting on surrounding countries. Vladimir Putin is an old KGB apparatchik that wants, one, to consolidate power in Russia, and, two, expand the old "near abroad." And we have to realize and act accordingly. That doesn't mean conflict with Russia, but it does mean that we shore up our friendships and relationships, particularly with our Baltic friends, Ukraine, Moldova, and other countries that lie in the path - and Georgia, part of which is still occupied by Russia - and increase our ties and friendships with those countries.

And do you see, in this respect, a president who is doing his job properly?

I would like to see the president of the United States be more steadfast in his support for the Ukrainian people. And so far it is my conclusion that he has not spoken out enough on their behalf, but I hope that he will.

Let's come to transatlantic relations, where many people think we have seen a low point not seen since the Iraq war. What is your view on this?

But this brings us to surveillance. Do you think President Obama should make a signal, maybe a public apology, to Europeans?

I think that President Obama should certainly express his regrets, in particular where Chancellor Merkel is concerned. I do not understand the rationale for eavesdropping on Angela Merkel's private phone, and whoever decided to do that failed to appreciate the consequences to our relations if it was ever revealed. That's why there's been a failure of congressional oversight. Second of all, it seems to me that the worst thing is happening, and that is that these revelations are not coming from the American government, they're coming from Mr. Snowden, in Russia, and that makes it all the more damaging than it would be, because some of the activities he's revealing, if explained correctly, would be acceptable, but when Mr. Snowden reveals them, the first impact is always negative.

Do you think the mass collection of data can be justified by the war on terror?

I think the collection of data, particularly of foreign phone calls - and we know that prior to 9/11 there were calls made overseas to terrorists that later committed the atrocity of 9/11 - so I believe we should be able to have surveillance capabilities, and intercept phone calls. But at the same time there have got to be certain parameters which have to guide us. The American people need to know what those are, but at least we should be much more forthcoming.

So do you understand the uproar, and what would be your message to European and German citizens?

Yes, I do. The message was that these things happen, and much of what happened was justifiable because of the threat and the nature of it that we faced. But we should not have done certain things that were unnecessary invasions of privacy, and we regret it, and we will make sure that not only does it never happen again, but that anything we do is subject to complete congressional oversight.

One of the current projects in the Transatlantic Trade and Investment Partnership. Do you think this is compromised by the NSA scandal?

You are strictly against the agreement with Iran over its nuclear program, calling it a dangerous step. Does Iran still belong to the "Axis of Evil"?

When you look at what Iran is doing spreading terror throughout the world - and they sent the Iranian Revolutionary Guard into Syria, Hezbollah, they are spreading terror into countries like Yemen - they're very evil.

You and other Republican senators want to increase the sanctions. A lot of people in Germany don't understand this. Do you really want to put this deal at risk?

No, I don't think so. By the way there's Democrats involved too. What we want to do is to say that if after six months there's not an agreement, then there will be increased sanctions. In this [current] agreement is enshrined the Iranian right to enrich. There is also a provision that the agreement itself may expire. There is no halt and the centrifuges continue to spin. They have lied and they have deceived for years and years, and for us to somehow agree that they have a right to enrich is, we think, very dangerous. But we will let this go on for six months, which is what the administrations says is what they need in order to reach a final agreement.

Israel described this deal as an historic mistake. Is this also your view?

Yes, I agree that this is an historic mistake. We should have had the Iranians say that they will renounce their right to enrich. They should have agreed to doing away with enriched material that they have, and also stopping construction at their facility in Arak.

What should be the aim of the permanent agreement?

The aim should be: if the Iranians want a nuclear facility, we'll help them build it, but they should do away with their enriched material, and their enrichment process, and they should dismantle their facilities, such as those that are in a mountain, and other facilities that they have, which could only be intended to develop a nuclear weapon.

The Republican John McCain is Senator for Arizona and was his party's candidate for the presidency in 2008.