Martti Ahtisaari: UN Security Council blocks a solution to the conflict in Syria 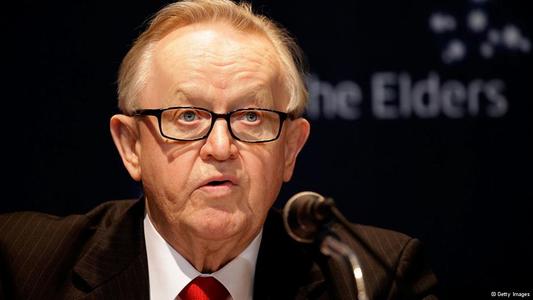 (PresseBox) ( Bonn, 13-02-08 )
Nobel peace prize winner Martti Ahtisaari accuses the UN Security Council of preventing a solution to the Syria conflict. In an interview with DW, the former Finnish president talks of the need for elections in Syria, even if the process is complicated.

Asked whether the international community has failed the Syrian people, Ahtisaari told DW: "What always annoys me is that we allow this sort of conflict to get out of hand. While I was in New York last year, the UN Secretary General and also the (Arab) League offered Kofi Annan the Special Representative task. My sense then was that there was a possibility to seriously start discussing. But nothing happened. So there were openings even then. And I was actually very disappointed that accusations were made in public, instead of having these five (permanent members of the UN Security Council), who bear the major responsibility, develop these different ideas and then start."

As to the question of how the carnage could be stopped, Ahtisaari explained: "First of all, I would urge the Permanent Five to talk. Because I left New York at the end of last February with a fairly clear idea in my mind that the permanent members were not so totally against each other in their views that a decent discussion couldn't at least start. So it's a very frustrating process, but I don't think we should give up. I am definitely in favor of a democratic solution. There is nothing more democratic than organizing good elections. And if both parties feel that they are so strong that they will win, they should not oppose that democratic solution."

Ahtisaari elaborated on his idea of organizing elections in Syria: "Now I don't think the government can any longer carry out any elections. You have to have somebody else. Is the UN that body? At least technically the UN is competent at organizing elections. That would, however, require an agreement that people (in Syria) would put their arms in the barracks and they would be disarmed for the time of the elections. You would need a fairly sizeable peacekeeping force from my own experience of up to 10,000 troops. I think we should use every avenue to stop the killing. It's very sad to see that the international community is so incompetent, nearly impotent is the right word at the moment."

Read the full interview in English at http://www.dw.de/...