Guido Westerwelle: "Young people want to take their destiny into their own hands" 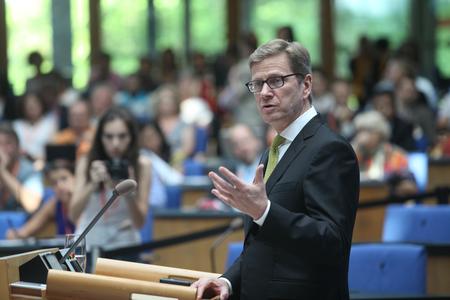 (PresseBox) ( Bonn, 13-06-19 )
When demonstrations take place, "these are a sign that a civil society is maturing," German foreign minister Guido Westerwelle said in reference to the protests in Turkey at the Deutsche Welle Global Media Forum in Bonn.

On June 18, Westerwelle delivered a keynote speech at the media conference on the topic of globalization, democracy and the communication of values. "People in emerging societies suffering under autocratic systems realize that they are being denied equal participation and that life can be different - because the increasing interconnection of the world is not a one way street," said the foreign minister. Especially young people want to "take their destiny into their own hands." The possibility to share life in real time has changed the world. "Only free societies give rise to the creativity that is needed to succeed culturally, intellectually, politically and above all economically and socially in a globalized era."

Referring to the role of the media Westerwelle said that unfortunately "simplification is one of the side effects of the immense competition that has also emerged between traditional media and new media." Westerwelle pointed out that the "technical revolution" in the past decades has above all led to an increase in the speed of news reporting, adding that "three-minute statements" cannot explain the world. According to the federal foreign minister, the world is becoming more complicated and more confusing and needs "more nuanced approaches."

"We are experiencing a globalization of values," said Westerwelle. When speaking about freedom of the press and freedom of speech he emphasized that "these two things belong inseparably together."

Westerwelle also used his appearance at the Global Media Forum as an occasion to congratulate Germany's international broadcaster on its 60th anniversary. "Deutsche Welle has made a great contribution to conveying cultures and values in the past decades."

Over 2,500 guests from all over the world are taking part in the three-day Deutsche Welle Global Media Forum at the World Conference Center (WCCB) in Bonn. This is the Forum's sixth edition and the theme this year is "The Future of Growth - Economic Values and the Media." Around 50 workshops and plenary sessions are organized in cooperation with many of DW's partners.

The 2013 Deutsche Welle Global Media Forum is co-hosted by the Foundation for International Dialogue of the Sparkasse in Bonn. It is supported by Germany's Federal Foreign Office, the Federal Ministry for Economic Cooperation and Development (BMZ), the European Regional Development Fund, the Minister for Federal Affairs, Europe and the Media in the German state of North Rhine-Westphalia, as well as by the City of Bonn. The North Rhine-Westphalian Foundation for Environment and Development is a cooperation partner.

You can find the full conference program at: www.dw-gmf.de

Recommend Guido Westerwelle: "Young people want to take their destiny into their own hands" press release