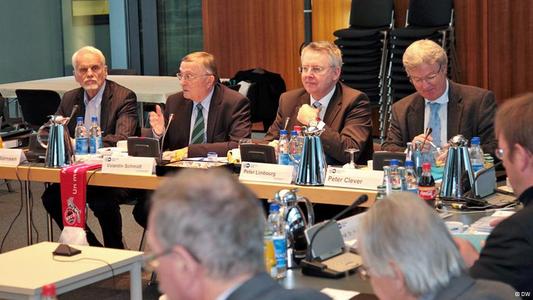 (PresseBox) ( Bonn, 13-11-25 )
At a meeting in Bonn on November 22, the Broadcasting Board has unanimously welcomed the reform plans Deutsche Welle Director General Peter Limbourg outlined, which aim to make DW a leading global information provider from Germany.

Chairman of the Broadcasting Board Valentin Schmidt said: "Only seven weeks after taking office, the director general has presented a convincing concept, which will allow Deutsche Welle to continue to successfully carry out its chartered task in the future. He has further developed the course adopted by his predecessor Erik Bettermann and has set new priorities for DW's strategy. The Broadcasting Board unanimously supports the restructuring measures envisaged by Peter Limbourg. We particularly welcome the plan to pool existing resources and to enhance the broadcaster's current affairs expertise. This will enduringly strengthen Deutsche Welle's international competitiveness."

The new Broadcasting Board will continue to accompany DW reform process after its constitution. The supervisory body will be reconstituted after all the representatives from social groups and organizations, as well as representatives from the Bundestag, the federal government and the Bundesrat have been appointed for a new five-year term.

At the meeting of the Broadcasting Board, Director General Limbourg announced that in the future DW will strive to be a global information provider from Germany. At the same time, DW's journalistic profile will be further strengthened. He said: "Through more dialogue and interactivity, DW aims to increase the relevance of its content to global decision makers and political opinion leaders by 2017. For that segment of the target group in particular, we plan to extend DW's reach on all its platforms, thereby raising the number of regular DW users from the current 101 million to 150 million. In the coming four years, DW aims to position itself as one of the top international broadcasters."

By early February 2014, DW will set regional priorities following clear criteria and will optimize its TV, Internet and radio content accordingly. In this process, DW will strive to consolidate and streamline its work.

English as "flagship" in programming

Since English is the lingua franca of global decision makers, English-language content will be extended and will play a central role as the 'flagship' of all DW offerings. For example, English TV programming is set to significantly expand its news coverage. DW will continue to offer German-language television and online content as well. German-language TV news coverage will also be extended and more clearly structured. Cooperation on news programs with German national broadcasters ARD and ZDF will be strengthened in the coming years. The successful multimedia content available for German learners will be further developed and linked more closely to other content on dw.de.

In order to foster dialogue and interaction with users, DW will create new formats and intensify its connection to bloggers and other online opinion leaders.

Following the merger of its two programming departments, DW will continue to streamline its structures and reorganize editorial work in Bonn and Berlin, Limbourg said.

The concept Director General Peter Limbourg has outlined will serve as the basis for DW's strategic plan from 2014 to 2017. The draft will be presented to the German federal government and the German Bundestag in spring 2014. Input from DW's internal "Competition of Ideas" and recommendations from staff representatives will be integrated into the draft.