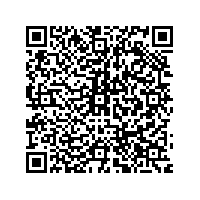 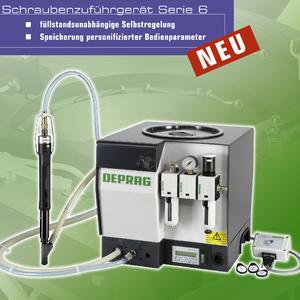 (PresseBox) ( Amberg, 09-07-02 )
DEPRAG SCHULZ GMBH u. CO. is confronting the growing challenges within the industry of series assembly with the innovative redesign of its existing product families. In July 2009, the experienced automation specialists, with particular expertise in the field of feeding technology, are launching a new generation of screw feeding machines, Series 6, onto the market. DEPRAG has improved on its renowned machines by augmenting the range of functions, heightening processing reliability and further increasing user-friendliness.

Billions of screws are assembled every day in worldwide industrial production-screws with diverse dimensions, light and heavy, screws that you can hardly grasp with your fingers, screws for electrical toothbrushes, mobile phones, kitchen mixers, screws for automotive or aircraft parts, and many more applications. They are all assembled in manual workstations or positioned by semi-automated or complex fully automated production systems. No matter what the specific application, it is crucial that the screw is "shot" to the screwdriver precisely and reliably. Only then is the efficiency and process reliability of production guaranteed.

For many years, DEPRAG has been manufacturing vibratory drive feeders for the processing of screws, threaded pins, bolts, nuts, washers, O-rings and other small parts. The systems function as follows: a vibratory magnet beneath the feed bowl generates micro movements in connection with alternating current, a set of springs and an integrated regulator. This causes the wave movement of the conveyed material in the bowl.

Variations in the vibratory speed are normal for traditional feeding machines. They are created by temperature fluctuations in the feeding system itself or as a result of the changing seasons. Another factor is the continuously changing fill-level height in the feed bowl. The resulting alteration in mass leads to further temperature variances in standard feeding systems. The material conveyed is consequently fed imprecisely.

The technical problem of alterations in mass is well known in the industry and hindrances to standard systems are only avoided at great cost and effort. For example, screw refilling can be controlled by an additional fill-level sensor attached to the feed bowl, which communicates with a part refill hopper via a controller. However, in the words of DEPRAG Sales Manager Jürgen Hierold, "This standard practice is awkward and expensive- the method is dated."

In their development of a new generation of screwfeeders, DEPRAG engineers have had one goal in mind: to combat the variations in the feeder speed. This ambitious goal has now been accomplished. According to Hierold, "The new generation of DEPRAG screw feeders transport the screw with a constant feeding speed to the separator." Hierold adds that the systems include a number of features that improve both function and processing reliability. For example, each Series 6 feeder is now equipped with a measurement sensor that registers the vibration amplitude in the feed bowl allowing the system to regulate itself - independent of the fill level or temperature!

As a result, whether it's within a complex automated stationary assembly system or a manual application in which operators are driving screws with handheld screwdrivers, each Series 6 provides a constant feeder speed, so that each screw is "shot" to the screwdriver precisely and reliably throughout the cycles.

Look at the situation from the point of view of industrial production: Mobile telephones are screwed and assembled with tiny screws, often by employees working at a semi-automated manual workstation. Several operators will generally be employed on one system during shifts and group operation. In operation, the screwfeeder presents the screws individually in the set cycle time. However, each operator is different. Operator A, who is always careful and works cautiously, needs more time than Operator B who has no trouble screwdriving at a faster pace. Operator A feels overwhelmed by the set cycle time whereas Operator B is frustrated by the process, which he finds too slow. Both of them blame the feeding system.

On standard screwfeeding systems user-specific settings can only be adapted for one operator. The adjustment to different operator data is complicated and in many cases only possible with the help of electrical technicians. It is therefore often avoided at the expense of the operator. The machine itself then determines the speed of production, which often opens the door to operational inefficiencies. This is another problem DEPRAG engineers set out to tackle when developing their new generation of feeders.

The resulting machine is one that adapts itself to the people working on it, via an RFID-Interface-System (Radio Frequency Identification) that can register up to 10 employees on the controller. Their personal parameters, entered once via the practical display, can then be called up instantly at shift change. Using an operator chip, each worker activates his personal settings: The machine adopts his individual working rhythm, the mood in the team improves, no one feels held back and no one is pressured. The feeding system is a welcome member of the team, and the working process becomes even more efficient.

More comfort for the operator - This requirement is high on every agenda in machine and systems engineering and was another focus of DEPRAG's engineers as they developed their new generation of screwfeeders. As a result, the systems' controllers have been thoroughly redesigned and modernized. The necessary device parameters are now clearly and simply displayed on the display monitor and keypad. It is no longer necessary to open up the controller. Feed bowl run time, air shot time, follow up time and lead time can easily be altered by the operator in the clearly laid out menu and two-line text display. There is also an option for soft start-up. In this case, the optimal acceleration ramp is automatically selected by the system.

It is also possible to use further diagnosis functions via sensor technology. Troubleshooting messages (available in several languages) clearly appear in plain text. If for, example, the feed bowl is empty, the message "fill level" appears on the display. If a screw has been shot through incorrectly then the error message "screw presence control" appears. Part and daily counters, as well as measurement of the assembly time, add to the processing reliability.

DEPRAG has designed the new screwfeeders to enable simple operation and startup. With this in mind, before delivery, DEPRAG engineers carry out a duration test that simulates the customer's series production. If, for example, eight screwdrivers must be set ready for production and then later paused (e.g. for workpiece exchange) and then be ready to start up again, then these procedures are programmed for the test run and checked on the controller in the factory. This approach saves the customer time and money and increases functional reliability for the relevant application. All individual machine settings are saved on file at DEPRAG to facilitate customer service and any future customer consultancy.

Series 6 screw feeders are especially effective in those settings in which the feeder needs to be integrated into a fully automatic production system. Provision for this kind of situation has already made, with a range of functions in each system's integrated sequence controller that allows it to control and monitor several periphery devices such as valves, monitor the feed-bowl fill-level and control the "shoot-in" of the screws. The customer no longer needs to waste time and effort programming the production system controller (PLC). Processing reliability is assured from the moment the first screw is shot in during the comprehensive factory test run.

There are now four separate start inputs available for the necessary screw distributors. Screw transportation can thereby be instructed more easily and adapted to applications via the system's PLC. Simple programming on the customer's PLC (only an impulse signal) is all that is needed. There is no more incorrect connection of periphery devices due to the use of the new permanent anti-short circuit power pack. This can be used worldwide for all devices from 85 to 264 V and 47 to 63 Hz.

Finally, the look of the new Series 6 feeder is impressive, with their clear lines and angles. Each system comes with a robust outer casing that is insensitive to dirt. The systems are currently available in a 0.75-litre fill bowl version, with a 0.15-litre and 2.5-litre version on the way. A soundproof housing ensures quiet operation.

DEPRAG SCHULZ GMBH & CO. based in Amberg, Germany is represented in almost 50 countries with 600 employees. For decades the DEPRAG engineers have been providing innovative concepts for automation and offering full services for almost every field of industry. Bernd März, the head of their Mechatronics Development Department is confident that DEPRAG is launching a product with top processing reliability and a wide range of standardized functions at a low price/performance ratio with this new generation of optimized series 6 screw feeders.