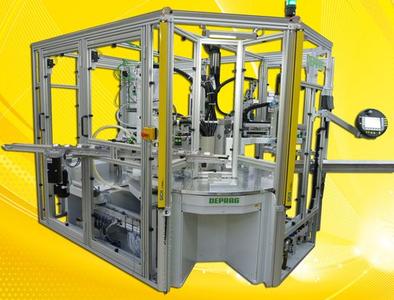 (PresseBox) ( Amberg, 13-04-24 )
The rear doors of the goods lorry clank shut and the engine purrs. A consignment of carefully packed components for a new assembly system is leaving the DEPRAG factory in Amberg. Behind it lie 14 weeks of work - from the date of the order to acceptance - and it is now on its way to the customer. Systems engineer Markus Solfrank loves his "constantly exciting" job. And as the brand new assembly system leaves the factory gates, his satisfaction in having done a good job is tinged with a little sadness.

It will take another six hours for the client's service personnel to assemble the compact rotary indexing machine - it measures less than four metres in every dimension - and put it into operation. Once complete, the semi-automatic assembly unit will start assembling high quality door fittings. "In a cycle time of under ten seconds it joins the door hinges, monitors them for quality and sends them on, ready for packing", said Markus Solfrank, as he explained how the new assembly unit operates. The medium-sized enterprise placed the order for a sum in the lower orders of six figures so that, with the improved production facilities, the firm's high quality demands would be assured.

From the many discussions he has held with his customers, Jürgen Hierold, Sales Manager at DEPRAG knows: "It is not just the big companies that are concerned with optimising their production facilities and ensuring the required long-term, consistent quality for their products. It is also worthwhile for medium-sized operations to acquire a self-sufficient assembly unit." Markus Solfrank added: "As systems engineers, our task is to find the best solution for every assembly job. As we do so, the major issues for our customer are the price-performance ratio, a rapid planning and implementation service, as well as the use of tried and tested technology."

The assembly system that has just been completed will be used to fasten high-quality door fittings, check the finished components and move them on to the next step of production. A worker places the pre-assembled components into the unit and the automatic assembly unit does the rest. Screwdriving and feed technology, the control unit and the robotics have been brought together into a single solution. "This project was absolutely up our street", beamed Markus Solfrank, as Jürgen Hierold added, smiling: "If the term 'one-stop-shop' hadn't already existed, I would have said that it was coined especially for DEPRAG". Because every key skill practised at the mechanical engineering company based in the Oberpfalz region of Germany is reflected in this assembly system.

Jürgen Hierold: "This is a huge benefit for our customers, but of course for us too, as the system construction engineers. We make every component of the system ourselves and we are one hundred per cent certain that they work. Moreover, we are able to design and construct the equipment to tried and tested standards, and that has a positive effect on price and delivery lead times, benefiting our customers." And that is not all. Our own DEPRAG specialists are active along the entire value added chain - from the initial consultation through to providing maintenance services for the new assembly unit.

Once they had held the initial intensive talks with the customer it was clear to the DEPRAG engineers that a traditional rotary indexing machine on which all the fastening and feed tasks could be carried out simultaneously and in the same cycle would be the best solution for this assembly job. They built a rotary indexing machine with eight positions, of which two will initially be unused, but will be available if the assembly job is ever expanded.

The worker is stationed at position 1. He places three pre-assembled components (for the hinge housing) into the workpiece carrier, which is then conveyed on the linear conveyor through position 2 (unused) to position 3. Two electronic, customer-programmable integral screwdrivers from the world-renowned DEPRAG MINIMAT-EC range await the component here. Their job is to fasten the two pre-fitted screw fastenings into the components to the precise angle required. They then tighten to the correct torque two further screws that have been fed in through the feeder unit. The MINIMAT-EC screwdrivers maintain the fastening parameters configured in the sequence control unit, and check that the screwdriving operation has been correctly completed.

The workpiece now moves on to station 4 where two plates (for later adjustments to the hinge) are press-fitted. For this part of the process the engineers selected a vibrating spiral conveyor combined with a belt-driven hopper. Electronic communication between the vibrating spiral conveyor and the belt-driven hopper ensures that the filling level on the feed bowl is constant, assuring availability of the plates ready for fitting at the exact same rhythm. Systems engineer Markus Solfrank explained what happens next: "The conveyor system moves the separated plates in the correct alignment towards a swivelling magazine into which two plates are placed opposite one another. A dual gripper picks up the two plates, moves them to the press-fitting position, and inserts them at 200 N." While that is happening the next two plates are being placed into the swivelling magazine."

The door fitting now reaches station 5, where the next screw fastening operation takes place. The plates that have just been assembled are now fastened with two screws each. Two pneumatic screwdrivers from the MINIMAT range make the fastening to the specified torque. Sales Manager Jürgen Hierold explains: "For reasons of economy we selected two low-cost pneumatic integral screwdrivers for this station. The technology used here is quite sufficient to achieve the correct torque.

Just two threaded pins remain to be fitted, and this takes place at station 6. This station has only one screwdriver spindle - also a MINIMAT pneumatic screwdriver. Markus Solfrank: "This screwdriver fastens the two threaded pins consecutively into the plates and to the correct torque. At this station we limited the number of screwdrivers to one (instead of having two operating simultaneously) for two reasons. First, the fastening job fits better into the cycle, and second, this solution is particularly economical."

The completed component now arrives at station 7 where a gripper lifts it, turns it 90 degrees, and places it on a belt to convey it to the packaging station. The assembly unit will not allow an incorrectly processed workpiece to continue. The station in question informs the master control system of the component's status (OK/NOK signals). An incorrectly assembled part is not passed on, but is returned to the operator at station 1 where he places it aside. The operator is able to follow the assembly process on an easy-to-read touch screen. Sales Manager Jürgen Hierold explains: "The system control unit also consists of proven DEPRAG technology. We particularly value our user-friendly man-machine interface (HMI). Many of the functions are founded on standard solutions, so are programmed at the factory. It means that the new system can be put into operation very rapidly. It also greatly reduces worker training time."

When the new assembly unit has produced the first assembled components and the final acceptance procedure has been signed off, Markus Solfrank and his colleagues will already be at work on the plans for the next project. They are looking forward to a new and fascinating order.

DEPRAG SCHULZ GMBH u. CO, headquartered in Germany, is a medium-sized automation expert, employing more than 600 employees in over 50 countries throughout the world. Not only is the company an expert full-service provider in technologies encompassing screw fastening, feeders, control and measurement, DEPRAG has an excellent reputation. The mechanical engineering company brings its products together to form complete, partially or fully automated assembly facilities. DEPRAG is a single source supplier - from the initial consultation through to the after-sales and maintenance service.