The Internet, a driving force: The operating system of society 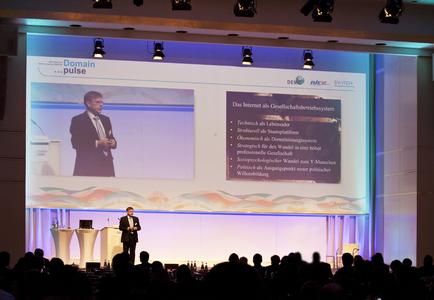 (PresseBox) ( Hamburg, 12-02-13 )
Which social structures will be challenged by the growing digitalization of all fields of life? How does the conception of man change and which skills will be needed in the future, in an increasingly networked world? Will it be possible to maintain the open, decentralized character of the Internet or will a top-down controlled Internet take its place? What are the ideas and innovations behind the planned new address endings, like .hamburg, .hiv or .sap, who will benefit from them, and what is awaiting the users in the extended name space of the World Wide Web?

The first day of the ninth specialist conference Domain pulse, which is held in Hamburg this year, provided interesting statements, forecasts and answers to these and other highly topical issues. More than 350 congress visitors listened to the lectures and international-expert panel discussions that have made the largest annual congress dealing with current topics and trends in the field of Internet and domains in the German-speaking territory an established meeting of the industry. The two-day expert congress "Domain pulse" is staged annually in turns by the registries administering the country code Top Level domains of Austria (nic.at), of Switzerland and Liechtenstein (SWITCH), and by DENIC, the registry of the German country code TLD .de, who is hosting this year's event.

The Internet as the operating system of society

On 13 February 2012, the conference started with Prof. Dr. Gunter Dueck's philosophical discourse about "the Internet as the operating system of society". A mathematician and Internet pioneer, the keynote speaker and former Chief Technology Officer of IBM Deutschland known as "Wild Duck" or "wilddueck" on the Internet, drew an astute picture of the challenges of tomorrow's working world. Experience, knowledge and competence will increasingly be provided by automated systems. What remain are imagination, flexibility, curiosity - and our professional intelligence we use to control continually changing processes and to solve problems. His conclusion: Our professional intelligence, for which mere expert knowledge is less important but which is rather based on soft skills, the ability to act, creativeness, and the creation of meaning, will be decisive for our future. Dueck said: "Either we will get professional or we will become part of a semiautomatic workflow - in a low-paid job. Machines have taken over the part of the good old IQ."

What the map of the Internet will look like in the future and which determinants will be decisive was illuminated by Markus Kummer, former Executive Coordinator of the Secretariat supporting the United Nation's Internet Governance Forum, now Vice President Public Policy of ISOC, on the basis of potential development scenarios. Against the background of growing protest against multi-state initiatives like ACTA (Anti-Counterfeitung Trade Agreement) he warned: "Negotiating political and economic interests of lobbyists behind closed doors, not involving the Internet community is a blueprint for censorship. Sustainable solutions in the meaning of good practices can only be developed when the proven collaborative bottom-up model of the Internet is maintained."

Which are the reasons that drove the unprecedented concentration of large Internet companies into market-dominating online oligopolies and what we can still do to secure monopoly-free access to the global digital knowledge was discussed by Dr. Wolfgang Sander-Beuermann, founder of the German Association for the Promotion of Search Engine Technology and Free Access to Knowledge, SuMa-eV, and developer of the German meta search machine metager.de giving some concrete incentives for further consideration: "Google, Facebook and Co. want to play Internet monopoly until all the others have gone bankrupt. But already today, there are a lot of tricks to avoid this ... ."

New places of action on the Internet: hype or hope?

Eagerly awaited finally was the panel discussion about the new Top Level Domains (TLD), which gave a cross-section of both the sense of new beginning and the concerns in view of the extended Internet number space. The background: Between 12 January and 12 April 2012 the Internet Corporation for Assigned Names and Numbers (ICANN) accepts applications for the new generic Internet address endings of cities, regions, commercial and non-profit initiatives. In the midst of the hot application phase the panel granted the visitors to the congress most interesting insights in the strategies and activities of various applicants and operators, but also allowed critics to utter their concerns. The tenor: The success of a new TLD should not only be measured by the registration numbers. Also niche TLDs with identity-creating effect that offer the users innovative services combined with high intangible value can well be profitable.

The Domain pulse 2012 will continue tomorrow, Tuesday, 14 February 2012. On the agenda are outlooks and insights into topics like Internet governance and access control, retained data and political approaches to secure copy rights against the background of topical agreements and legislative initiatives in Europe and in the USA (ACTA, SOPA, PIPA) and the latest protests they have caused in the web and on the street. Experts of the Enquete Commission "Internet and Digital Society" of the German Bundestag and representatives from the Board of Directors of the Internet Association for Assigned Names and Numbers (ICANN) and Internet activists from the political scene will discuss this topic.

Domain pulse live on the Internet

You will find the complete program of the specialist congress and all information about the protagonists involved on DENIC's event website www.domainpulse.de. Here, you can also follow the congress in real time via a livestream. About one week after the event, we will also make available live recordings as a retrospective of the event.

As the central registry, DENIC administers the now more than 14.8 million domains under the Top Level Domain .de and thus provides a crucial resource for users of the Internet. It sees its role as that of a competent, impartial provider of services for all domain holders and Internet users. With more than 120 employees, DENIC creates the foundation through its work for German Internet pages and e-mail addresses to be accessible throughout the world. The about 280 members of the Cooperative are IT or telecommunications businesses based in Germany and elsewhere. Working in cooperation with them and other partners, DENIC is committed to guarantee the secure operation of the Internet and its further worldwide development as a not-for-profit organization. It operates the automatic electronic registration system for its members, runs the domain database for the Top Level Domain .de and the German ENUM domain (.9.4.e164.arpa), manages the name server services for the .de zone at currently 16 locations distributed throughout the world, and renders a considerable contribution to the further organizational and technical development of the Internet in cooperation with international bodies (e.g. ICANN, CENTR, IETF).

The Internet at a crossroads: When will politics arrive in reality?

Mit Integration Platform-as-a-Service, abgekürzt iPaaS, lassen sich Anwendungen und Daten aus Cloud- und On-Premises-Umgebungen verbinden. Unternehmen müssen ihre vorhandene IT also nicht sofort über Bord werfen, sondern können den Weg in die Cloud langsam angehen. read more
The publisher indicated in each case is solely responsible for the press releases above, the event or job offer displayed, and the image and sound material used (see company info when clicking on image/message title or company info right column). As a rule, the publisher is also the author of the press releases and the attached image, sound and information material.
The use of information published here for personal information and editorial processing is generally free of charge. Please clarify any copyright issues with the stated publisher before further use. In the event of publication, please send a specimen copy to service@pressebox.de.

Recommend The Internet, a driving force: The operating system of society press release