The site of today's Lauchhammer Solarpark has a long industrial tradition and accommodated numerous industrial enterprises over the years. 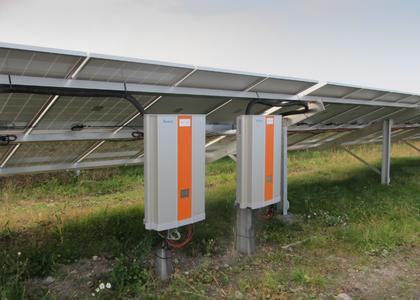 The site of today’s Lauchhammer Solarpark has a long industrial tradition and accomodated numerous industrial enterprises over the years. It began in 1914 with a briquette plant, followed in 1917 by a steel mill. From 1937 until 1943, several chemical factories were built on the site.

During World War II the factories were heavily bombed and largely destroyed. After the war, the industrial usage continued with the construction of a coke plant, in operation from 1951 until 1957. From 1957 until the plant decommissioning in 1991, city gas was mainly produced here.

Following the plant closure, demolition of the industrial facilities continued from 1992 until 2005. The towers of the coke plant are the only structures remaining and will be preserved for the future.

The intensive industrial use for many decades had a negative effect on the environment. Groundwater and soil at the plant site became contaminated with various toxic substances. To address the situation, in 1999 extensive sanitation work began. During this sanitation phase, an immense amount of contaminated soil was removed from the site and the groundwater was purified.

A large part of this area was returned to green space, and the rest of the land was made available for commercial use. 9.5 hectares was planned for a solar park. At the invitation of local city officials, multiple investors presented tenders with various implementation proposals.

For the PV plant in Lauchhammer, 135 string inverters and about 16,000 solar modules were installed, with a corresponding PV power of 3.83 MW.

Inverters from Delta are characterized by a robust and reliable design that can withstand even the most extreme weather conditions. The housing is made of high quality aluminium covered with a special finish to make the inverter very durable and corrosion-resistant. This makes the TL-series inverters the perfect choice for installations in protected outdoor areas. In combination with its high efficiency, a long-lasting and reliable operation is guaranteed.

The use of string inverters were preferred over central inverters because the former need less cables and components. Additionally, there are no extra buildings needed to house the Delta string inverters. As a result, the investment costs could be reduced. Also, since the SOLIVIA TL string inverters are maintenance-free, no maintenance contract is needed, which significantly lowers the operating costs.

The Solarpark Lauchhammer was put into operation on 25 June 2013. Now the Solarpark from Emmvee, making up part of the former industrial site which still has usage limitations because of past contamination, can be used for a forward-looking and environmentally friendly purpose.

The cooperation with Emmvee was very positive and resulted in a successful implementation of the project.

With its inverters, Delta has made an important contribution to the success of this project and once again made evident that they will continue to advance their mission to provide innovative, clean and energy-efficient solutions.

Since 1999 the subsidiary Delta Energy Systems has invested in the development and global marketing of the Solar Inverter Program, which has made an important and successful contribution to Delta's focus on providing innovative, environmentally friendly and efficient energy solutions for a better future.

Erfüllung, Entfaltung und Lebensgrundlage auf der einen Seite – Überforderung, Burnout und Workaholismus auf der anderen: ein schmaler Grat. Aber woran erkennt man Workaholismus? Hier finden Sie Tipps, um Arbeitssucht vorzubeugen. read more
The publisher indicated in each case is solely responsible for the press releases above, the event or job offer displayed, and the image and sound material used (see company info when clicking on image/message title or company info right column). As a rule, the publisher is also the author of the press releases and the attached image, sound and information material.
The use of information published here for personal information and editorial processing is generally free of charge. Please clarify any copyright issues with the stated publisher before further use. In the event of publication, please send a specimen copy to service@pressebox.de.