Middelkerke, Belgium, invests in rooftop solar PV systems on 17 of its city buildings

To reduce its carbon emissions by more than 20% and decrease its energy operating costs, the municipality of Middelkerke installed rooftop PV systems with outputs totalling 1 MW. 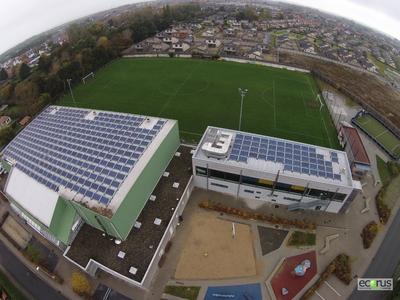 On May 7, 2015, the Middelkerke municipality, together in an association with 8 other Belgium local authorities, became a signatory of the Convenant of Mayors. This European movement was established in 2008 by the European Commission with the aim for all its signatories to commit to cut CO2 emissions of their territories by at least 20% by 2020 and also to implement sustainable energy action plans within one year of their signing up. The signatories are made up of cities throughout the EU that vary in size from small villages to major metropolitan areas.

As an experienced installer of solar PV projects in municipalities with additional long-term investment expertise, Ecorus was selected to provide a proposal for the feasibility, supply, design, installation and connection of a photovoltaic system for 17 buildings owned by the municipality.

The town council received the Ecorus proposal with recommendation for the municipality to install solar panels on rooftops covering an area of 5000 m2. The surface area of all solar modules together is equivalent to that of a football field. The majority of the solar modules were placed on De Branding and De Bamburg sports halls and the municipal workshops.

An investment of 1 million euros was required for the project, with an estimated payback period of 8 years. The solar panels are expected to supply 20% of the electricity required in the related municipal buildings. Therefore, it is considered a profitable investment, with the added benefit that it is completely self-funded by existing city budgets and future energy savings.

Before the construction phase, an aerial survey of the city building rooftops with a UAV (Unmanned Aerial Vehicle) was implemented by Ecorus because they found a large influence of shadows onto the solar modules from their surroundings. The study was able to determine the optimum placement of solar modules for the highest solar energy yield on all the varied roof surfaces.

Construction of the PV project began on July 10, 2015. As part of the project, energy loss of all the city buildings was studied and a plan to reduce losses with additional insulation and digitizing of the heating systems was implemented. Insulation was strategically placed in boiler rooms and in roofs to minimize the building energy consumption.

A total of 3,400 250W solar modules and total of 34 Delta solar inverters with outputs of 5 kVA, 10 kVA, 20 kVA were installed in the 17 different municipal buildings. The installations were challenging because the solar modules had to be placed on 17 different roofs and each one required a slightly different type of roof mounting system. Despite these challenges, Ecorus was able to install the entire lot of PV systems in a relatively short time.

According to Ecorus, the Delta inverters were selected because of fast delivery and good experiences in the past with the units.
Delta RPI inverters are indeed built to be robust and reliable and are ideal for rooftop commercial systems. With their high peak efficiency up to 98.4%, the Delta solar inverters provide the city with a stable solar energy source giving high yield for many years.

The construction phase lasted for a total of 4.5 months and the commissioning ceremony took place on December 1, 2015.

The new solar rooftop systems are generating an estimated 1,000 MWh electricity annually. Furthermore, they expect to provide an annual savings of 127 tonnes of carbon dioxide – a value representing the savings of CO2 emissions from 128 homes’ energy use for one year.

According to the Mayor of Middelkerke, Janna Rommel-Opstaele: "The installation of solar panels and accompanying energy-saving measures all fit to the goals of the European Covenant of Mayors. We are committed herein to reduce carbon emissions in our territory by at least 20% by the year 2020. Of course, we should not overestimate these figures, but this initiative also helps provide a systematic approach to provide local sustainable energy and boosts citizens awareness of it.”

Ms. Rommel-Opstaele goes on to say that she believes as a local authority, they are setting a good example for the residents of this community to follow suit in reducing carbon emissions and in this way encouraging everyone to do their part to halt climate change.

Delta is proud to have its solar inverters selected for this project and indeed share similar goals with the municipality of Middelkerke, halting climate change and contributing to worldwide energy savings with smarter building designs and highly efficient solar inverters.

Delta’s cooperation with Ecorus was very good and the two companies expect to work on further similar projects in the future in the common mission of helping municipalities reduce their carbon emissions by installing more solar PV systems and thereby creating secure, sustainable and affordable energy.

Delta, founded in 1971, is a global leader in power and thermal management solutions and a major player in several product segments such as industrial automation, displays, and networking. Its mission statement, “To provide innovative, clean and energy-efficient solutions for a better tomorrow,” focuses on addressing key environmental issues such as global climate change. As an energy-saving solutions provider with core competencies in power electronics and innovative research and development, Delta's business domains include Power Electronics, Energy Management, and Smart Green Life. Delta has 114 sales offices, 56 R&D centers, and 30 manufacturing facilities worldwide.

Throughout its history, Delta has received many global awards and recognition for its business achievements, innovative technologies, and dedication to corporate social responsibility. Since 2011, Delta has been selected as a member of Dow Jones Sustainability™ World Index (DJSI World) for five consecutive years. In 2014, Delta was ranked by the Carbon Disclosure Project (CDP) at the highest A-level of the Climate Performance Leadership Index (CPLI), and it was the only company from nearly 2,000 listed companies in Greater China to make it to the CPLI list.